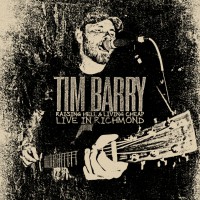 "My name is Tim Barry, I live here in Richmond, Virginia. For those of you who traveled to the show, welcome to this beautiful city."

It's a simple enough introduction.

For those not familiar with Tim Barry, shame on you. Founding member and vocalist of legendary Richmond punks Avail, Barry has certainly paid his dues. After six full–lengths, Avail took a "hiatus" in 2006 and Barry went to work armed with only an acoustic guitar and the voice that had carried him for years with his former band. Laurel Street Demo marked his solo debut in 2005, with Rivanna Junction just a year later in 2006. Three more full–lengths later, Barry has put out his first live set with Raising Hell & Living Cheap – Live in Richmond.

Opening with fan–favorite "Dog Bumped," it's obvious from the get–go that Barry is loved in his hometown. The moment he starts singing, the crowd's adoration is evident, singing/shouting back almost every word to him. By the time he bellows, "I shot him fucking dead in his relaxing chair," the crowd is shouting back with the same venom. Introducing the next song, "Driver Pull," Barry explains its origins: written on the top of a loaded coal car on a freight train from Lynchburg to Richmond, VA. The song's somber, slow tempo is a contrast to the set's opener, and the crowd responds in kind, singing lowly, and taking over for Barry as he steps away from the mic.

His solo catalog is well–represented. Rivanna Junction ("Dog Bumped", "Avoiding Catatonic Surrender"), 28th&Stonewall ("Walk 500 Miles", "Downtown VCU") and Manchester ("Ronnie Song) all take turns being rotated into the live set, with 40 Miler receiving more coverage (the album was recorded at the end of six months of touring). Avail fans may be disappointed that there are no acoustic versions of their faves ("Lombardy Street" would be a particular welcome addition), but it's a Tim Barry show, and he clearly prefers to stand on his own, rather than take a nod and wink to his past.

Live albums are hit or miss, as they are frequently stopgaps between studio albums, or contractual obligations. While Raising Hell & Living Cheap make mark time until the next Tim Barry release, it's a welcome souvenir of what was undoubtedly a great night. Those that were there should own this as a memento of a great night. Those that weren't will be inspired to check out his back catalog. And then, you know, maybe hop a train or two.