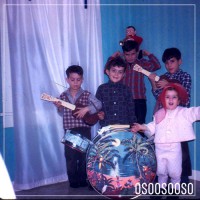 osoosooso's precursor, State Lines, has always had a strong 90s vibe, with a strong Get Up Kids influence on their first record to a more polished alt rock vibe on follow up For the Boats. With osoosooso, the band is exploring a sound that would have fit right in with the best of the almost made its in the 90s. The grungey, poppy feel of "Molly's Lips," Teenage Fanclub and even a healthy dose of Blue Album era Weezer, combine to create songs that stick with you on the first listen, but still leave layers to uncover.

Sole member Jon Dimitri's slightly nasally, slightly gravely vocals are not enough of either to be offputting, but just enough to be distinct. The release tells a story of a relationship building and breaking, starting with the jangly "Moving In," where hints of things to come litter a painfully naive narrator building to the climax coming in "The Expiration Date," where nothing seems to be working. "Need some place to moveâ€“ I'll tear down these walls for you," is a soul crushing reminder to anyone whose watched a relationship fall apart with no clue how to put it back together. Fans of the Cure will find an easy access point with "Safe," the lead guitar is very evocative (intentionally or not) of mid era Robert Smith. Appropriate too, as both bands are essentially one man.

I don't know that any breakâ€“up album really qualifies as a "concept album," but there is a solid narrative and album flow that drives the record forward.

"Para-effin dise, Baby!" is the only true lull in the album for me, but there are 3 true gems and out of 7 tracks that's a remarkable feat. I know I'll excitedly await whatever else the group puts out, but I definitely think there is more uncover in this vein and I hope the group explores it.

Sloppy Seconds / The Queers: Live in Louisville
Go to the review index