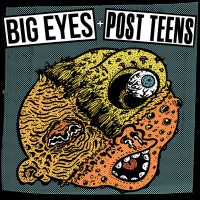 With their new split on No Idea, Big Eyes and Post Teens showcase their sonic evolution. Both bands have been steadily growing over the last few years, and while this split is short, it's still awesome sauce all over. Behold!

Big Eyes go first with two tracks, "Asking You to Stay" and "It's Not Fair." While the band's earlier material has a jittery energy to it, these songs sound awfully confident and full—sounding. Could Big Eyes be the next Black Keys thanks to their garage rocking ways? Are they secretly the new Ergs because they keep dropping catchy 7—inches? Might they be a couple of guitar freak outs away from Screaming Females? I have no idea. I'm just a human person. But know this: The choruses are ripe, the guitars are huge, the message is true. Good times.

Post Teens are apparently a pop—punk band now, which is cool. If Florida had more punk jams and less guns I think things would be nicer. Post Teens does their part "Mexican Painkillers" and "Friendly Start," a tasty double shot of fuzzy, energetic punx that go big on the gang vox. Since Big Eyes don't sound as Ramonesy anymore, Post Teens picked up the Gabba Gabba Hey sign and ran with it. More winners abound. Millions rejoice.

Beach Slang: Who Would Ever Want Anything So Broken? [7-inch]