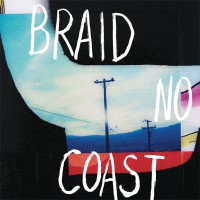 Recently, I was part of an interesting discussion that tagged bands like Sunny Day Real Estate and Braid, among others, as throwaway bands —— meant for a certain time and place —— which isn't "now." In the truest sense of the word "debate," many of the personnel involved had a mutual musical respect and high admiration for the bands but still touted them as something arcane; a souvenir if you will. Now, I'll jump to making the point that No Coast isn't a typical Braid record. It mashes gears in a new, more contemporary direction at times, and as light as it is in going down this road, it's a pleasure to say that there are still enough throwbacks to remember their worth in the '90s. Is it enough to sate the ardent fans, waiting eagerly to sink into the new record? That's tough to call. But Braid definitely find themselves retaining a decent portion of their formative identity while fiddling to establish something new in the process.

The album is split down the middle in terms of musical intricacy. Some tracks like "No Coast" and "East End Hollows" are dance—y, power—pop tunes that feel minimal. They're still pretty busy on the fretboard as Bob Nanna and Chris Broach continue their camaraderie and sharp dynamic switching up the vocals. These lighter tunes do keep a nice layered feel to them and represent the collaborative knots that Braid fans, and Hey Mercedes fans, fell in love with way back when. It's ripe with that old yet distinct Midwestern rock disposition in terms of lyrical and vocal duty —— more measured but still attached to Braid's identity. Musically and ideologically, you wonder if Braid's back to just experiment or even try to fit in, and naturally so, but listening closely, you understand the musical trade—offs, compromises here and there and also, where and why they shifted their revered sound. I'd say it's maturity but musical growth feels more like it. These songs are less emo and more broad in scope, riding pop—punk waves more than first anticipated.

Then comes the Frame and Canvas and Age of Octeen moments. Slightly harsher vocals rear their heads to meddle with lush, emotional blends of melody and aggression. It's a gauntlet Braid decide to pick up with guitar—building indie tracks such as"Bang" and "Pre—Evergreen." They're slow, anthemic and very cathartic, like poetry, audible, yet in motion. It's a unique rarity these days to see bands achieve these musical heights without sounding like too material a production but Braid pull it off excellently. "Lux," a track they've had out for a while, "Put Some Wings On That Kid" and "Climber New Entry" all balance these two divisive sounds via distorted guitars and crashing cymbals to re—emphasize why Braid was made for the '90s. The Seattle vibe is heavy in them. It all snowballs into a fitting finale in "This Is Not A Revolution" which starts off slow and ballad—esque (like an acoustic plaintive) before coalescing into an unyielding juggernaut of explosive riffs. It combines eras of Braid smartly —— the yelping of catchy punk tunes to the sombre melodies to the emo—laden aspects of the band.

In the end, the format this record is laid out in creates a neat pattern to give a gleaming overview of Braid. They're a band that will always find their footing by making genuine music that they want to make. Sure, their tastes have changed which will reflect in the music they make, but so will our taste, which shows up in the music we listen to, or criticize. The big picture that remains is that Braid still have a lot to offer —— stylistically and as a monument in several sub—genres of rock —— while paving their own way and creating openings for others. No Coast is a record that encapsulates their evolution pretty well, as a record that allows space to let the music dig in to your skin, and also, as one to show that there's no need to fear change. They did "then" so well to me and given the time we're in "now," I think topping this will be Braid's biggest challenge...if they embark on undertaking it.