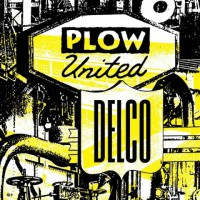 Plow United recently announced their debut album would be reissued, and that they'd be releasing a new EP in 2014. Delco is the new release by the band, a four—song blast of melodic, catchy, poppy punk rock.

The EP is around eight minutes long and barely lets up or slows down for a second. The songs are simple and catchy, but rarely repetitive and manage to each leave their own impact.

"That Was Awesome" is a 50—second affair which starts with a proclamation of "that was fucking awesome" before continuing into a fast chant—along track. The other tracks on the EP, "All For You" and "Live Like a Viking, Die Like a Viking" show more of the band's talents with the former being more melodic than the others, even including a cool guitar solo; and the latter being, by far, the catchiest song on the record with its "woah—ohs" and Ramones—style verses into its chorus of "live like a viking, die like a viking" —— the best track on the short EP.

The EP is rounded off by a cover of Floating Action's "Don't Stop (Loving Me Now)" where the song maintains the feel of the original. Just faster. The verses are definitely faster. The chorus is kept true to the original, though, and plods along with the vocals taking the forefront.

Overall, you wouldn't think this was an EP by a band which is more than 20 years old. It has stylistic qualities of '90s pop—punk but the urgency of a new band just starting up. Perhaps the long hiatus is the reason that the band have kept their youth.