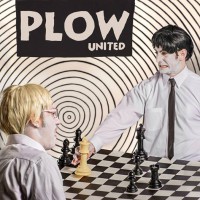 While 2011's Sleepwalk: A Retrospective did an admirable job of reintroducing Plow United to a younger audience, the band's run of vinyl reissues certainly goes a step further. Going in reverse chronological order, the band has finally remastered its self—titled debut, with assistance from Stephen Egerton of the Descendents and It's Alive Records. It's a frills—free pop—punk masterpiece reborn.

Plow United opens with three of the band's catchiest songs ever: "Tour Guide at the Alamo," "Spindle" and "Reason." Huge hooks, frenetic drums and a whole lot of open honestly spill out as the band plays as fast as they can. Early Plow in particular is crazy fast, and with 12 songs totaling just under 21 minutes, Plow United certainly rushes by.

Side 1 packs in the hits. Besides the opening trio, there are also fun pop—punk tunes like "That Girl," "Plow" and the mighty "Martin." When Plow United played their reunion set at Riot Fest East, they opened with "Martin," a minute—long shot of angst about trying to reconnect with people ("I'm still me and you're still you"goes the shouted conclusion).

Perhaps the only knock against the record is that nine of the 12 songs are already available on Sleepwalking, and the three missing are among Plow United's weakest. They're also, tellingly, relegated to the record's back half. "You Are Here" still comes off muddled even with the remastering. Ramshackle closer "Game of Chess" sounds like an unfocused studio jam that the members may have devised to alleviate boredom in the studio.

It's pretty darn cyclical that Plow United should arrive the same day as the band's new post—reunion EP Delco. One tells you where they have been, the other tells you where they're going. Turns out they've still got a lot to say about Delaware County.