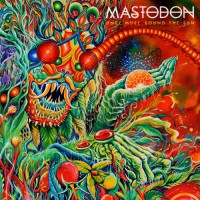 It's been approximately 10,000 years since a mastodon was seen on Earth. Known for their resemblance to modern—day elephants and now—extinct mammoths, the mastodon roamed what is now known as North America until it was a victim of both predation and climate change. Mastodon, however, has been roaming the world since 2000, with their first recorded evidence being 2002's Remission. The introductory "Crusher Destroyer" and punishing "March of the Fire Ants" from that album introduced the world to a new kind of animal: One with loud, punishing guitar riffs and multiple rhythmic time changes. Mastodon, simply put, heralded a new era of progressive metal with their debut album. In 2014, after a three—year break since 2011's acclaimed The Hunter, Mastodon is finally back with Once More âRound the Sun.

Longtime fans will quickly recognize their progressive—metal heroes as soon as "Tread Lightly" begins to play. Slowly building into a sudden wall of metallic noise, the new listener will also be taken in immediately, the rhythm section of Brann Dailor (drums) and Troy Sanders (bass) pulling them down. Brent Hinds and Bill Keliher's swirling guitars will only wrap themselves even more tightly, ensuring that whomever starts listening to Once More âRound the Sun will stick around for the full ride. There's no turning back once the play button is pressed (or the needle is dropped, unless it's to turn the record over). It's That good.

Pounding drums signal "The Motherload", with Dailor's clean vocals similarly dominating the song. Bassist Sanders gives a vocal delivery to interrupt the verses, and another one of Mastodon's strengths is once again revealed: The band's vocal abilities. There's no competition to be won, only the interplay between the three vocalists throughout the album's eleven tracks (only guitarist Keliher stays away from the mic). Each vocalist brings a different feel to each song, with the combination adding to Mastodon's rollercoaster effect.

"High Road" highlights Sanders' low, growling vocal delivery and a plodding tempo. The chorus brightens with singers trading off, with the verses going back to Sanders' distorted growl. The instrumental parts continue with the same method, going from furious to melodic and back again. The song finishes dirty and determined, ending with a bang, not a whimper.

The title track is a furious mixture of vocal interplay between Sanders and Hinds, with the guitars and drums mixing between them just as seamlessly. Starting furiously at the beginning, the tempo plods to an end, giving way to "Chimes at Midnight", which speeds back up almost as quickly and without warning. It's the kind of ride that Mastodon has mastered, taking the listener on a psychedelic ride that never seems pre—determined, yet always feels natural. By the end of the track, you feel as if you are floating through space.

"Asleep in the Deep" maintains that floaty, ethereal feel, with the band evoking a dreamy (perhaps drugged—out?) feel, while "Feast Your Eyes" brings the listener closer to the ground, cranking up the ferocious sound one would equate with Mastodon's long—extinct namesake. "Aunt Lisa" is introduced by some serious guitar picking (and bass interplay), and punctuated with fierce distorted growls in the chorus, with Hinds' sweet vocals soothing the pain immediately after. Drummer Dailor takes it over once again, only to have the growls once again conquer his efforts. The song finishes with a a group of cheerleaders and a "Hey! Ho! Let's Go! â¦ Let's Get Up and Rock and Roll" cheer at the end, evoking both the Ramones and Faith No More's "Be Aggressive" (from 1992's Angel Dust).

"Ember City" continues the band's sensory attack, with all four instruments equally contributing to the experience. No one sound dominates the landscape, and it's a quality that resonates throughout the album. All four players are equally represented, and while one may be singing lead, or taking a lead part, the others never take a backseat, all contributing equally to the overall soundtrack. While the listener may be paying more attention to one aspect of the sound at any given time, they would certainly notice the absence of any one of the others at that same moment. Mastodon's sound is that cohesive.

The 55—minute album closes out with "Diamond in the Witch House", which is every bit as epic as its title suggests. Starting with an acoustic guitar, it slowly builds into an electric dirge leaning heavily on Dailor's ability to alternate rhythm, his drum fills becoming a centerpiece of the song's structure. Eventually, each member gets his chance to shine, both vocally and instrumentally over the song's nearly eight—minute length. Taking the listener on the aforementioned Mastodon rollercoaster, it goes for that final loop at the end before finally letting the track stretch out so the rest of the energy and speed can dissipate.

Topping itself with every release since its inception, Once More âRound the Sun arguably shows Mastodon as a band at the pinnacle of its creativity. This is 2014's Metal Album of the Year.