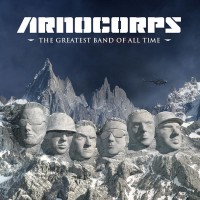 The beauty in Arnocorps is that their message is actually much deeper than their bombastic faÃ§ade suggests. At face value, the group's album The Greatest Band of All Time seems to be 14 songs paying tribute to the classic period of Arnold Schwarzenegger cinema. There's a song about fighting a Predator. There's another that has the refrain "Get your ass to mars!" Another pays tribute to the great Barbarian God—king, Crom.

But, if you ask the band (which includes six members, two of which play bass), they'll rebuff such an accusation. In a heavy Alpine accent (or "Ballzy" accent as they put it), the band argues that these songs are not based on Schwarzenegger films, but rather, are ancient songs from time immemorial that Schwarzenegger has co—opted for profit. Therefore, according to Arnocorps, they are seeking to set these mythic tales back into their proper mantle.

Whether you believe these six commandos or not, as the band rips through this set of hard driving, energetic heavy metal, one thing becomes clear. Whether songs like "Commando" are based on stories that were written in the 1980's AD or BCE, they actually operate on the same exact level as the ancient epics. Each song tells tales of heroic ideals without letting the grim realities of humanity deface the message presented. For example, "Predator" might be about killing an alien in a jungle, or it might be about facing up to a problem plaguing that just won't let you escape. "Wheel of Pain" might seem to reference Conan's enslavement, but it could also be construed as an encouragement to make it through tough times. As Nietzsche once said, "what does not kill me makes me stronger."

It helps that these tunes are backed by a pumping heavy metal soundtrack. A combination of 80's thrash and the NWOBHM, the songs fire up right away, tear away for about two minutes, and get out. There's no pointless soloing here, but there is a dedication to precision and invigorating riffs. Really, the whole thing does sound like the soundtrack to (one of the better) 80's action movies.

Of course, the whole thing wouldn't work if the band wasn't so over the top (though if you asked them, they might say, "What's Over the Top?") As the music blasts through tune after tune, frontman Holzfeuer, in his wonderfully heavy Alpine accent, shouts out messages of encouragement like "Crush your enemies" and "He was the last action hero! He was full of machismo!" And when he shakes his fist at the fates with lines like "I'm here! Kill me now" it's that much more hilariousâ¦ and profound.

Some of these songs might seem reminiscent of the 1980's action flick, but that's only because they both espouse an ideal, a concept, that was created when Ancient Alpine man first picked up ash to paint on the wall. A "hero" or "shero" doesn't have to be some foreign, mythological thing from 3,000 years ago or on the silver screen. These tales are about you and me. The heavy metal in the background just makes it easier to get started working towards that ideal.

Note: This release was originally released in 2005 in very limited quantities. Alternative Tentacles has made the release widely available again and has done a beautiful job in packaging both the CD and vinyl versions with beautiful booklets and the band's background.