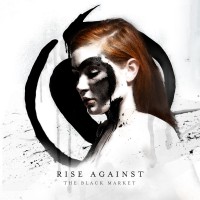 Each new record by Rise Against can be looked at in two different ways: First, context can be taken into account. The band used to be one of the most respected and talented punk bands in the scene in the early 2000s and have progressively moved towards the mainstream. Second, context can be ignored and an album can be looked at as a single release. The release of 2009's Appeal to Reason saw fans disappointed as the band moved towards a poppier sound, yet on its own, the record isn't too bad. It regains the bands strong political sentiments and skirts the edges of punk rock. 2011's Endgame seemed to be a slight return to form with faster songs and even stronger political tones.

Now comes The Black Market, the band's seventh record. From the opening of "The Great Die Off" it becomes clear instantly that this record is the biggest departure from the band's old sound, so far. But rather than the poppy sound of Appeal to Reason, or the harshness of Endgame, the record has a distinct rock sound. Tim McIlrath's voice is harsh and prominent, yet without the raw edge of previous records. The song is heavy, but beyond the verses, remains mid—tempo.

The rest of the record continues in a similar vein. Lead single "I Don't Want to Be Here Anymore" is promising until the extremely long and uninteresting chorus. The aptly—titled "A Beautiful Indifference" and "Zero Visibility" are completely forgettable. "Sudden Life" is perhaps the biggest misstep of the record, sounding like a half—hearted attempt at a hard—rock song. Each of these songs, though, in one way or another, sounds as though it could work, but something just isn't gelling. This time it feels less like a natural progression and more of a forced one.

The songs that do work, work really well. "The Eco—Terrorist in Me" shows that the band can still write a Revolutions per Minute—era song perfectly. Its screamed verses and catchy chorus make it by far the highlight of the record. "Tragedy + Time" despite being the poppiest song on the record sounds sincere and would work as a good penultimate track, but not so much as the third song on the record. The title track has a certain Rise Against feel to it, which many of the other songs lack.

The final three songs is where the record finally gets truly interesting. "Awake Too Long" is classic Rise Against material with its political lyrics (rarely seen throughout the record), fast verses and massive chorus; the three factors which the band have always made great use of. "People Live Here", while it may not stack up against "Hero of War" or "Swing Life Away", is a solid ballad with anti—war themes. Closer "Bridges" skirts between tempos and does so cleverly, maintaining energy throughout.

The music throughout is consistent and strong; melodic guitars, gruff vocals while the rhythm section ploughs along throughout each track. The problem seems to be more of a song—writing one. The band have found themselves as one of the biggest rock bands around at current and seems to be writing for a different audience, which of course is expected. However, that doesn't make it any less disappointing.

So, looking at the record with context, it's disappointing. But this time, without context, it's still pretty disappointing. It's a decent radio—rock album with punk influences. The potential is there, within each track, yet not quite reached. Maybe every album they release in the future will be disappointing, or maybe they'll return to their punk roots as bands often do when their popularity wears off. For now, though, despite a few good songs, The Black Market is an overall misstep in the band's catalogue.

The Copyrights: No Knocks [7-inch]