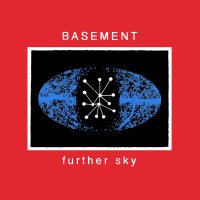 Seems like this is the year of comebacks. Can't complain —— not when word—of—mouth and a growing fan base brings a band like Basement out of hiatus. Imagine getting more popular after you stop making music than when you were plugging away on tours or in the studio. Not saying that's necessarily the case here but it really seemed an injustice when 2012's Colourmeinkindness saw these UK gents bow out. It was pretty fucking awesome to see them bid adieu on such a high note but still very bittersweet because the '90s emo/grunge passion inculcated into their musical structures lived on in quite a few bands after. While Further Sky doesn't encompass those same musical elements of long, drawn out and depressive (yet very powerful) rock music, there's still something here that makes Basement appeal. The heavy tones are highly absent but there's the same contemplative feel and introspective touches of the paintbrush you came to love about the band.

This record can best be summed up as upbeat. They've certainly scratched out the complex melodies of old and gone for something more minimal, yet effective. "Summer's Color" isn't their typical jam as it pans out lighthearted, optimistic and more towards the pop—punk side of things. In fact, there's a neat melodic interplay with this sound and '90s alternative on the track. Basement had a tendency to stay a bit singular and one—dimensional at times (which in all fairness worked pretty fucking well for them) but here, they spread their wings widely with an easier, breezy sonic signature. One trend they don't buck is how well they deliver the necessary amount of gravitas with weary yet beautiful lyrics. That's a formula you don't mess with and it echoes in how potent their narrative is. In just three tracks, you can sense they wanted to just explore a bit and step into the light while still tapping on the liner footnotes of 2011 and 2012.

"Jet" roams around slow to mid—tempo and is another track devoid of heaviness. It's a steady stream of clean—cut vocals (which really sound so smooth and do come off as well produced) dragging on thick basslines which keeps them interwoven with an honest, genuine yet mysterious sound. It's not as enigmatic and internally driven as in the past but their musical core is still there and very much connectable on top of the band's little oddities and idiosyncrasies. Even the cover of Suede's "Animal Nitrate" is tight—knit and sharp amid the very polished production. At times, the three tracks feel a smidge overcooked and too clean but still, you latch onto them. Kudos on the latter for bringing back the cynical and darker ambiance of the band —— which feels like a big Easter egg to end on.

Ultimately, Basement's aesthetic does feel shunted here into very new and at times, strange territory. But, they make this change work. Reason is, I think, it isn't something permanent and comes off as a stepping stone to indicate to fans that they're taking their foot off the pedal and laying in the mid—range aspect of emo. Citizen and Sainthood Reps pop to mind after a couple listens and it seems like Basement do realize that the market they wanted a couple years seems to be flourishing now. Did they come before their time? Maybe. Is their time now? I'd bet on it. This album's way too short and did need some shaking up but it's proof of concept that the team's ready to pounce and capitalize. More so that this genre seems ripe for the picking. I missed their old, silent rage in Further Sky but at day's end, it still is a big treat. Can't wait for them to build on it. Fingers crossed.