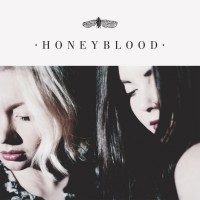 Honeyblood's self—titled debut was something I thought would remind me about things I tried to forget. Namely, listening to Best Coast for hours on end with an ex that drove me insane. I prayed that this band wouldn't throw me back to those miserable days. Really hard. Reason being is I'm a big FatCat fan and I trust their bands, which follows up from my passion for We Were Promised Jetpacks. Scottish bands really appeal to me and this two—piece always came off as an outlet that had something special in the making. That drivel aside, to say, Honeyblood hit most of the right spots for me comes as a huge relief. Very, very huge. It fosters a lot of indie—pop, sensibly and gracefully blended into a hazy production that never misses a beat on how catchy, minimal yet smartly technical it sounds.

In my brief experiences listening to their cassette from 2012, the anticipation built. It seemed a fun tease. There was a twinkly, candid elegance to their sound. Simple, raw and a great insight into them. "Fall Forever" and "Super Rat" are the best intro they could have conjured because it's their truest representation, indicative of how they seemed destined for something big outside the UK, but more so, it pulls those 2012 elements back to the foreground. Both tracks are breezy, summery and anthemic, which blends well with the anger they express so cutely. Stina Tweeddale kills it on guitars while blurting her clean, dreamy vocals to Shona McVicar's thumping foundation in a manner that doesn't alienate the listener. In fact, it's quite alluring as an indie—pop bubble that feels like garage, shoegaze and atmospheric pop all bundled together. Sunny outros, jangly hooks and an overall surfeit of jingles help build chorus after chorus, verse after verse and themes of romance, heartache and many other branches of emotion.

The pacing and tempering is also very noteworthy —— the record's fast at times but then slows down to let the words sink in. Honest poetry. This is seen in "Bud" which possesses a strong folky aspect to it, yet it bleeds freshness. It's frank and in this blunt attitude, Honeyblood shine —— oozing catchiness over a palette of melodies. The expressive nature of the duo, their experiences recollected and lyrical depth all come off melodic, cynical and concise, and again, they all strike the right chords with the listener. The vocals are straightforward and non—blustery, making that connection even more endearing. "No Spare Key" encompasses all of these traits even more as it fleshes out as a true indie jam and an overall electric ballad made for starry—skied nights. Then again, that's most of their songs. Unafraid and exposed.

It gets repetitive at times and you're drowned out by the poppy flavor here and there but as flawed as it is, the album does offer way more benefits than cons. Honeyblood ended up being more vulnerable than I thought and actually did remind me of those disastrous days with my ex. Only difference is now, the soundtrack they provide is much, MUCH, better. Parts of the record did nod to La Sera, Eisley and Now, Now but still, it did so in small doses. What's the real takeaway here is that Honeyblood have carved their identity out pretty well and definitely in a fashion that'll have a lot of folks keeping an eye out. Scotland does it again.