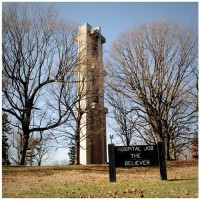 Luke McNeill is a busy guy. Between drumming and songwriting for The Copyrights and engineering at Sonic Iguana Studios, he's managed to start up Hospital Job, in which he handles guitar and vocal duties. If you're a fan of The Copyrights (or if you've heard their debut album "Downer, Downer, Downer") you'll know what to expect here: catchy, mid—tempo pop—punk with introspective lyrics and sing—along choruses.

Lyrically, there are themes of loneliness and yearning for acceptance throughout the record. "Times Square" includes the lines, "You'll go through a lot to be less alone/You'll tell yourself a lot to feel less alone". The album's closer, "Meetings", is about the willingness to do anything to be accepted. The song starts off low, McNeill singing, "I'll go to meetings/I'll pay the dues/It sounds great/But there's nothing left to lose" and builds to a climax, singing over and over, "I just want to belong."

The production value on "The Believer" is definitely a step up from their last effort. Fred Malcom's drums are crisper—sounding and gone is the distortion on Cory VanMeter's bass. My only real complaint with "Downer, Downer, Downer" was that it sounded a little hollow, especially on the raucous choruses. That's not the case here, as there is more low end and the album has a fuller sound overall.

2014 is looking like a good year for Luke McNeill, with the release of "No Knocks", "The Believer" and the upcoming "Report". And with solid output like this, it's going to be a good year for pop—punk fans as well.

Goddamnit: How to Take the Burn