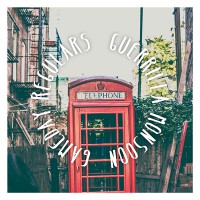 All In Vinyl / Paper + Plastic

Another day, another split release. No, I'm not wary of them, in fact I find them quite exciting and intriguing, especially with bands that I'd never previously encountered, so with this single featuring a band from each side of the Atlantic (USA and UK to be clear on the geography) I was primed and ready to be pleased/disappointed/mildly interested but already moving on to the next thing to do.

With Guerrilla Monsoon representing the UK and Gameday Regulars stepping up on behalf of the USA, it was a case of me heading into the unknown but it didn't really take long for the latter to make an impression on me with a gritty and anthemic opener in the form of "The Punisher." The guitar sound wins me over from the off and the lead vocals add to my enjoyment on this track â both are provided by Will Romeo â as both tick the boxes that are key elements in what I look for in a good record.

Not to be outdone, Guerrilla Monsoon open up strongly with "December," a track drenched in melody and the ability to get my body shifting this way and that with its inherent rhythmic feel. "Rome" is an even better song that maintains my bodily momentum and is probably my favourite of all four tracks on the single which is no mean feat, given the strength of this record.

I've never been to The Fest but I just get the impression that both these bands would go down well in some small, packed bar full of people looking for tuneful, contemporary punk rock that is easy to get into and enjoy.

I can see both bands winning over new fans with this single, and as always it's good not to have carbon copies of each other featured on the same release. Yes, Guerrilla Monsoon and Gameday Regulars are from within the same musical ballpark (or cricket pitch if you like) but it's easy to distinguish one from the other whilst they manage to complement each other quite nicely here. Gameday Regulars have a bit more punch across their two contributions but this is nicely complemented by the slightly poppier sound that Guerrilla Monsoon offers up.