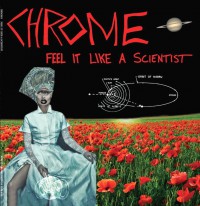 Feel it like a scientist is Chrome's first album in 12 years but it feels like it was released right after 1979's classic Half Machine Lip Moves. So, that is to say, due to the band's sci—fi trappings and avant—garde nature, the album still sounds far ahead of its time.

Feel it like a scientist succeeds because it finds Creed continuing his powerful, buzzing guitar approach— but, he supplements it with the spirit, if not the flesh, of Edge and his experiments. Creed's guitar is low and rumbling, sounding like a motorcycle blazing through sludge, while his band introduces those wonderfully dark Chrome spirits. On "Prophecy" a ghostly choir calls out in gossamer, but creepy tones, while Creed rips along with his trademark downtuned chords. "Lipstick" is driven by a Kraftwerkian beat while robots buzz and chirp in the background. As is classic Chome style, tape effects abound.

Feel it like a scientist is something of a contradiction. Without a doubt, it's one of Creed's darkest works. The entire album seems to be set in the shadows, suddenly flashing futuristic sounds before drenching them in Creed's notes. But, despite the pontifications found herein, such as being destroyed by giants, sex droids, cat women, and tales of slave planets, the band stops to have fun here and there. "Brady the chicken boy" is a minute diversion packed with ridiculously funny clucking.

Despite his dark musings, Creed seems to be having a blast. Scientist is an excellent showcase of everything that made Chrome great, and continues to make Chrome great. Long time fans will eat this up. With 35 years to come around and finally understand this galactic trip, maybe the rest of society will catch up on this release as well.

The Doublecross: The Timeless Destruction