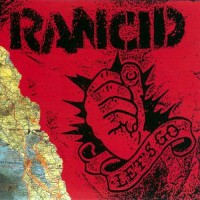 In the summer of 1994, most impressionable teenagers were still getting over Kurt Cobain killing himself and taking grunge with him, wondering what would come along next and fill the void. Around the same time as Cobain's suicide, Green Day's Dookie and The Offspring's Smash were birthed into the world and videos from those albums started popping up on MTV. A few months later, they were joined by "Salvation," from Rancid's Let's Go, and the transition from long hair and flannel to mohawks and studs picked up speed.

Twenty years on, Rancid's Let's Go still stands up as the primary entry point for many '90s punk kids —— the record that took them beyond the poppier, skatier leanings of Green Day and The Offspring and introduced them to a richer palette of punk rock. A year prior to Let's Go, Rancid released a debut album that left behind the trappings of Tim Armstong and Matt Freeman's previous band, Operation Ivy, and took a harder, grittier approach to punk rock. For Let's Go the band added Lars Fredriksen on second guitar, infused their sound with a bit more pop and set off a barrage of Clash comparisons the likes of which the world had yet to see.

While "Salvation" became tiresome due to heavy rotation on MTV, other tracks like "Radio" and "Nihilism" are fondly remembered as touchpoints that every '90s punk rocker remembers, such that in many ways they're bigger "hits" than "Salvation." Let's Go, though, had more than the hits going for it —— it was consistent, with just about every track packed with the kind of power and energy that epitomized Rancid in its early days. Matt Freeman's bass, as always, provided an inimitable backbone, and he also turned in some of his best vocal performances on "Tenderloin," "Ghetto Box" and "Black & Blue." Meanwhile, Tim Armstrong was at his marble—mouthed best, channeling his manic energy while demonstrating the best parts of his unique delivery.

In later years, Rancid would reach full—on pop stardom with â¦And Out Come The Wolves explore more diverse influences with Life Won't Wait and eventually end up spending a lot of time hanging out with Good Charlotte. Whatever you think of the band now, in considering Let's Go as a document of a time and place in punk rock, it stands up quite strongly, and compares quite favorably to Epitaph's other notable 1994 releases, which include Smash, NOFX's Punk in Drublic and the first Punk—O—Rama compilation. It also serves as an influence for countless bands, especially of the street punk variety, who continue to ape Let's Go—era Rancid's look and sound today. If it's that kind of lasting influence that's the measure of an album, then Let's Go measures up pretty well, and unlike many 20—year—old albums, it remains a pretty good listen, too.