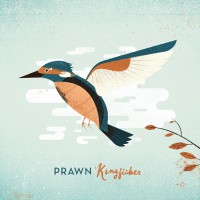 Prawn have always been one of those ensembles whose musical spread shimmered as a sound on the cusp of greatness. Their knack for rendering such organic, sincere tones in their storytelling while mixing up tenacious emo—based tunes really laid the groundwork for personal and emotive connection. Amid their dramatic commentary, they managed to come off instinctive in their sonic direction and as a band that really wasn't a copy of any other. Even better, their output helped build them as an entity that isn't anything too groundbreaking but still one that's hard to imitate. 2012's Ships and a split with Joie De Vivre earlier this year compound these points and it's a pleasure to share the relief and joy that Kingfisher brings. It's indescribable at times because it feels like a huge payoff for years of hard work. And rightfully so. A lot of folks immediately jump to bands like The Hotelier, Evan Weiss' projects and so many others in the field of contemporary (dare I say modern) emo but Prawn lay down a fitting statement here as to why they're ready to roll with the juggernauts.

The record is one that skirts around many sounds. You get a sense of the full range of the band and it's sure to surprise even their most loyal backers. The tight musicianship around Kingfisher assembles like a puzzle. The composition swings from melodic lulls and introspective themes to mid—tempo jangly hooks to ramped—up mathy sections —— all contributing to a strong sense of indie/post—rock diversity. Dynamic's the word I'm looking for. "Scud Running" opens with subtle horns (paying homage to the founding fathers of the genre in the '90s) while wailing around vocally like a juiced—up Arcade Fire.

The horns become more prominent on "Thalassa" later on down the line to really signify that while tribute will be paid to older generations of emo, Prawn's all about showing the new direction of themselves and of course, the genre. These are prime examples of the duality explored on Kingfisher which give deeper clarity and insight into the band's shift from twinkly, slow jams to pacier strings of melody. The loud, distorted sprawls layered over a much more focused front line further build a more complete and robust set of tracks. The dual vocals really feel assertive too which gives the album that extra kick. It's a more fleshed out Prawn this time around and that's something fans have clamored for for a while.

Rougher cuts like "First As Tragedy, Second As Farce" add even more indie flavor with their grainy, garage vibe to dirty the production a bit. It strikes a good balance with the calmer, polished gems such as "Old Souls" to further show how varied Prawn wanted the album to be. It's a very smart shake—up as no track comes off as repetitive. Bits and pieces do throw the listener back to stuff like older Park, Into.It.Over.It and one of the newer bands in the field, Donor, but overall, it feels like this is the album to distinguish Prawn from everyone else. "Halcyon Days" has a nice little progressive/experimental overlay to it which really brings forth the intricacy of the album. One that's more guitar driven than anything Prawn's ever done but still, one that doesn't compromise their character despite batting out of their cages. It's a great finale to round up affairs. Fookin' Prawn —— distinct, a bit more aggressive yet still holding true to their core ideals. Don't let this slip by.