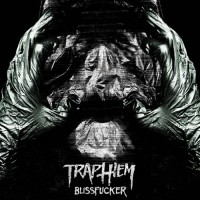 Don't let that guy from The Needle Drop fool you: Blissfucker is great.

Darker Handcraft was a record I liked because it wanted you dead and wanted to get to killing you immediately. Since people in genre can recognize Left Hand Path but not Suicide Invoice, Darker Handcraft is a record that got defined with the idea of crust, those three grind—ish songs everyone praises but no one listens to, "Evictionaries," and "The Facts."

Blissfucker is more sludge. Now, sludge isn't new to Trap Them. "Dead Fathers Wading In The Bodygrounds" is the most obvious one to me, but "Drag The Wounds Eternal" and" Scars Align" are also precursors. Maybe "Gutterbomb Heaven On The Grid" also? What matters is that Trap Them is de—emphasizing grind on their most recent record. And it's hardly that, they're just writing longer, fuller songs!

Yes, there isn't the pulverizing four minute triptych at the end of Blissfucker. There's just that two odd minute blast beat frenzy as the second fucking track. And also the opening to "Lungrunners?" (And the first two thirds of "Former Lining Wide The Walls!") If you want it, Blissfucker's still got you, but it's also doing different things. Ryan McKenney's broken glass yawp is still an assault on the listener's ears, but against the longer, more traditional metal of Blissfucker, his yawp changes the proceedings from ominous to actual danger.

Put differently, his vocals maintain a high threat profile. You can hear producer/engineer Kurt Ballou get more adept at recording by virtue of how clear Mr. McKenney's vocals come through. Mr. McKenney now fully sounds like the night terrors of whatever New Hampshire town he was born in. Mr. Ballou uses the old metal trick of burying the vocals in the mix, giving the listener the impression that they're struggling to get through.

My bandcamp download did not come with a .pdf of the art (and even if it did, band hasn't been putting lyrics in those things since Seizuresâ¦), but I'll throw a ten spot on the guess Mr. McKenney is yelling about the empty formalities of family/community ties, the horrors of violence and the broken humans left in the blast radius of war. Maybe zombies? That part I'm less sure of.

What I am sure of, and couldn't tell you why, is that Blissfucker feels like guitarist Brian Izzi's opus. Maybe it's the length. Maybe it's the fact that there's moments of solos, or something like them. Blissfucker feels new, even if I can point to places in earlier records that suggest this shift. Shift is the right word, but I ought to be careful on the emphasis. Trap Them remains a Swedish—style thrash band, anchored by a hardcore punk vocalist.

Blissfucker, as a whole, feels, strange to say, imperial. There's a grandness and scope to Blissfucker which previously was only an ambition in the band's discography. And if metal/hardcore/punk fans hate anything, it's ambition. The storyline of "grind/d—beat band makes another fast, obliterating full length" is easy. From Seizures In Barren Praise into Darker Handcraft into Blissfucker, the songs have been getting longer, while maintaining that energy. Seriously. I listened to Seizures In Barren Praise for context. Blissfucker's got it.

It is a shame, of course, that drummer Chris Maggio is no longer with Trap Them. Whether it is my imagination or something approaching truth, his drum work on Darker Handcraft seemed to be hyperactive and kept the Trap Them machine moving at an exhilarating speed. Brad Fickeisen, the new guy, is no slouch himself (is that the second ex—The Red Chord member Trap Them's rotated in?) His steady work in my imagination makes it easier for Mr. Izzi to write his epic, but Mr. Maggio unleashed Trap Them in a way that leaves an impression. At the live show, of course, he fed off of and into Mr. McKenney's boundless, evil energy.

"Former Lining Wide The Walls" hides a melody in the final 40 seconds of the song that is worth the price of admission, upstaged by Mr. Fickeisen's delirious drum fills. The first two+ minutes is a thing I'd like to hear played at half time just to figure out how the hell they do it so precisely.

Seeing Blissfucker as a statement is seductive. Mr. McKenney abandons the "Day [NUMBER]:" portion of song titles, it's been three years since the last one, It's one and one half as long (roughly) as the previous record, there's maybe solos, and there's verbiage in the press release to support the theory. I'll agree, to a point. Less a statement than a reminder?

I know two things: I know Blissfucker isn't what I expected and I know I like it. Blissfucker is the full metal record that they've been threatening to write since "The Iconflict." Blissfucker is what we believed and hoped they had in them.

Empire! Empire! I Was A Lonely Estate: You Will Eventually Be Forgotten