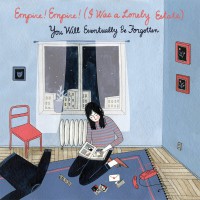 Empire! Empire! I Was A Lonely Estate

You Will Eventually Be Forgotten (2014)

Emipre! Empire! I Was A Lonely Estate is one of the most heartwarming and endearing records this year —— minimal but filled to the brim with a quiet energy that disarms you. The Latinens focus on life's experiences, both sour and sweet, in a candid, melodic fashion that bears down heavily amid twinkly, simple indie/emo tones. The emotional weight drives you to the point where it feels like a diary being read to you over a sweet soundtrack. The couple really pour a lot of drama and tension in but at day's end, it soothes and comforts more than anything else. Sure, there are moments of anxiety and their disposition does feel somewhat depressive at times, but ultimately, this batch of tunes wind up as nothing short of hauntingly beautiful.

This duo's always been known for their intimate, creative style of songwriting and that's the strong point which makes You Will Eventually Be Forgotten so relatable. They focus a lot on this aspect of storytelling which throws a lot of nods to MewithoutYou. It's a collection of tragedies, too sad and cumbersome at times, but laden with an emo narrative that's best described as honest and conversational. The softest and simplest guitar work accompany horns and keyboards, all subtly strewn in, and match up so well time and time again. Despite its pace, the record never drags on. "Ribbon" encompasses all of these elements and is as straightforward as it gets, the sense of urgency and intrigue of the rhythm at hand never diminish. Many songs on the record follow this similar pattern.

They cache so much hurt into this novel. Keith Latinen's nucleus of exposition works wonders here. "If It's Bad News, It Can Wait" paints a tragic ending fit for a Sundance script and that's when you remember his love for Jeff Lemire's graphic novels acted as inspiration in conceiving a lot of the material on offer. The music's arranged like heartbreaking television. "We Are People Here. We Are Not Numbers" has that fidgety, finicky indie feel to it to help even out a lot of the calm lulls on the album and as a balancing act, they pull it off. Exhaustive at times but one without cheap thrills. I love the message here that if darkness finds you, that doesn't mean you chose it and it's a theme highly evident on many tracks. The second half of the album meanders a bit but with such a strong first half, you don't really count any losses.

Invoking their friend Ben Sears to create a brand—new illustrative body of work, titled "Ribbon" (after the above—mentioned opening track), shows the scope of the project and how ambitious the band's vision is. It tells the album's stories in eleven illustrated chapters and is a perfect companion to a record that isn't a concept one but more an anthology that bores into your chest. So much so, to the point that it'll have you reflecting on life and the hurt associated. Charming and inviting best sums this musical prose up. Don't miss out on the ride.

Nashville Pussy: Up The Dosage