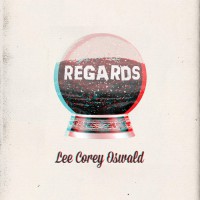 No Sleep Records has put out some quality stuff these past few years. They find little gems and maximize their sound, guiding them along the way to channel music that really shouldn't be missed. There's a nice mainstream and marketable feel to so many of their bands yet the indie/DIY aspect is very much present. Lee Corey Oswald is very much one of those ensembles. Having heard them before, there was a lot of potential to be harnessed but I'll admit they didn't strike me as anything extraordinary. Their music fit the indie—punk label pretty nicely but again, I couldn't spot an X—factor. It's a pleasant note to say that this time around, they craft a more expansive record that has a lot of weight to it on so many fronts and genre—wise, really touches a lot of different bases. While Regards does traipse around their older mannerisms and influences a lot, it doesn't stick to their stylistic guns, which allows them to flesh out their messages even fuller and also, a bit more unconventionally. The result? A solid record that's sure to catch you off—guard if you never took them in before.

They shake a lot of what folks tagged them with in the past —— folk and indie meeting punk —— opting instead to float around a few variant yet focused methodologies in terms of musical structure. There's the pretty awesome grunge feel that borders on another No Sleep alumni in Balance and Composure. This is seen on the opening "Always Never" and the crunchy "Progress." It throws back to Sainthood Reps as well. Their mode of operation, however, switches up regularly on this record as they tinker with pop—punk elements as well, which deflects a lot from the usual indie—punk gig. Snazzy hooks and upbeat start—stop breakdowns resonate on tracks like "Scatterbrain," which despite the mainstream pop—rock aura, does carry out a lot of the cynicism in their storytelling. A lot of the lyrics are more reflective and less optimistic which doesn't match the flashy punk at times but it doesn't take away from the album at all. The heavy narrative with such a contrasting sound somehow comes off smoothly.

Their versatility further shows on the piano—driven "Soda and Cigarettes" as well as the folkish acoustic "Sarah, Work is a Four Letter Word." The latter has that indie ballad setting to it which mixes well with other guitar—centric songs like "Regards." They amp up the distortion a lot and even offer snippets of Title Fight which further emphasizes the grittier and hard—edged layers this time around. Ultimately, Regards perfectly distills Lee Corey Oswald. While the second half of the record fizzes out a bit, overall, there's enough pizzazz to go around as it proves to be an easy listen and a very strong jumping—on point. It's accessible as a record and does conclude as their most ambitious to date. Their old ideologies are there as well as some things new in the mix, which all fit neatly together. Mid—tempo and melodic punk done right is the best way to sum this up.