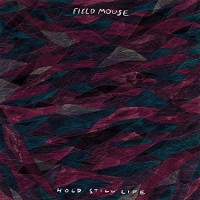 Hold Still Life is album that is cast in stone as one for the brokenhearted. It's right up there with the collective of summer records that won't be known (and subsequently, praised) for their optimism or upbeat tones, but, instead, for a steady stream of beautiful, bruised soul—searching elements glazed over with heavy (and I mean heavy) tones of melancholy. It's charming, melodic and as their sophomore debut, it's as fresh as they could have hoped for. Usually, bands like this, rely on a formula for churning out wispy, romantic and strikingly dark dream—pop but when it comes to Field Mouse, they're consistently good at breaking the mold they've set themselves. This album is no different as it peddles an unrestrained and vivid degree of songwriting that's full of mainstream charm yet very reminiscent of underground acts like Baby Ghosts, Tancred, Now,Now and of course, the more fiery Hop Along.

The hazy dynamic works well for Field Mouse and as fuzzy as they get, the variability of their music helps to keep them grounded in a constant state of shoegaze and surrealism. A soft narrative is something Rachel Browne prides herself on. The gorgeous ballad in "Kids" emphasizes and allows her prose to reign. Each melodic twist feels like a page turn in your favorite novel. "Tomorrow Is Yesterday" is another example of this with a Phantogram—esque bassline that ends up corralling a Silversun Pickups pace to pretty much sum up how they've opted for the indie—pop route over the more overt electric grunge tones of music past.

It feels experimental at times too. The synth—heavy '80s pattern reminds one heavily of Depeche Mode on the haunting "Two Ships," again giving Browne room to shine. This in turn paves the way for a painting of star—crossed lovers in the haunting, melodic "Asteroid." Browne's whispering vocals really stretch well, whether it's on heavy distortion (such as "Bright Lights") or the calmer lulls of the record, and it's a big plus to play off her lyrical strengths. The delivery is sublime, more often than not, as her expressive nature pounds at you. The allocated rhythms strap well to the reverberating guitars and soaring melodies at hand, making the tracks all the more memorable. Not to mention, brilliantly arranged. Fans will no doubt feel a sense of gratification because Browne's lead is sonically rewarding and honestly one of the best this year. Simple and minimal yet powerful and driven. Authoritative, dreary yet sensible. It's one which amplifies the band a lot.

When you weigh their older stuff, another thing stands out here. The album's ambience is jammed with tight grooves and alluring, albeit non—intricate, instrumentation which makes the takeaway that much sweeter this time around. The refreshing sense of relaxation comes in droves by the time the 12 tracks expire and while it's invigorating, you do feel a strong depressive feel. That's when you wonder about the record actually panning out as one for the hopeless romantic. I love hearing the lush textures graze over non—blistering tones but I'll admit, there was a bit too much of these swoon—ish elements towards the end. Still, it's nothing too detrimental and you can ignore the flaws. As with a lot of their music, Field Mouse make ambitious and personal tracks come alive. It's music to get smitten to. Their oeuvre is seductive and highly intimate which lends a lot of praise to how neatly they forged their potential into something more whole. With a lot of the record being inspired by their New York experience, I think that tangibility and common—draw to the folks on the streets make Hold Still Life appeal more. Browne translates so many themes — yearning, vague yet meaningful connection. longing for brighter days — that you can't help but see them as an accessible spark in the indie—pop world. If you're looking for a woozy album to self—indulge, this is it. It bursts at the seams with introspection as the closer "Water In The Valley" chalks up a wrap—up that's laden with sentiment.

Ultimately, this batch of songs demonstrate what months of hard work does and the realization that you can be dissonant and enigmatic, yet poppy in a clever disguise. That's Field Mouse for you in a nutshell. As a non—loud record, it's a crucial addition to their already—impressive body of work and I can't wait to see what methods they employ next. Musically, they show why volume is subjective with respect to impact. They teach us that in isolation, you find a lot of silver linings— More than you first assumed.

The Dumpers: Business As Usual