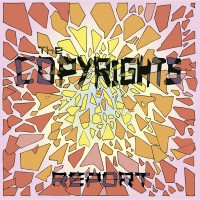 When it comes to pop—punk, The Copyrights can teach you a thing or two. Recording five full—lengths over the past decade, the band has consistently treated its listeners to short, raucous songs with loud guitars and memorable hooks. Three years after their last release (2011's North Sentinel Island), Carbondale IL's favorite sons are back with Report.

A band with so many albums and shows under their belts might be expected to change it up as time marches on. Not The Copyrights. The moment the opening songs, "Slider" and "Heart of Glue" hit your ears, you know it's the same band with the same sensibilities. Longtime fans will be instantly drawn into the album and its catchy sing—alongs, while those checking out the band for the first time will find songs like "Stuck in the Fall", "The World is Such a Drag", and "Telescope" irresistibly catchy and stuck in their heads.

Fans that picked up the No Knocks single earlier this Summer will already be familiar with "Keep the Change" and "No Knocks". Newer songs like "World's on Fire" and "Wishbone" sound just as recognizable with the latter song playing lyrically on the idea of having wishes as opposed to motivation and drive ("I got a wishbone/but not a backbone/I can't stand it/But I can't stand on my own")

Clocking in under 28 minutes, each of the 14 songs on Report is as memorable and catchy as the other. Repeated listens only make the listener constantly rethink what may be the best or favorite on the album. But the truth is, with the songs no longer than two minutes, it's hard to have time to ruminate on this as once you do, the next song is already in your ears. "No Knocks" quickly gives way to the blast of "Fireworks" which slides effortlessly into the aforementioned "Wishbone" and before you know it, you've spent just under a half hour as the album closer "Away We Go" starts to play.

The Copyrights have followed up their last release with what is arguably the best of their decade together. Report will be an instant favorite among fans as well as a great place for new listeners to see what the fuss is about. Highly Recommended.