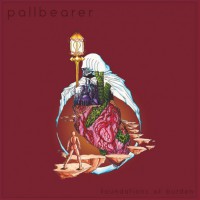 Every year in heavy music, there seems to be one album that stands out from the pack and dominates the conversation: Liturgy's Aesthetica, Baroness' Yellow & Green, Deafheaven's Sunbather, and so on. This year, somewhat strangely, that album appears to be Pallbearer's Foundations of Burden. I say "Strangely," not because there's anything wrong with the record (in fact, quite the opposite is true), but because those other records were so shocking and new. They were either radical reinventions or bold introductions. Foundations of Burden by comparison is relatively safe. It's more of a refinement of and improvement upon Pallbearer's past work than any sort of bold new statement. That said, whatever reason the hype train decided to pick up Pallbearer is completely warranted, as they have crafted a fantastic piece of doom metal and one of the best recordings of the year in any genre.

It's hard to describe a record where the average track length exceeds ten minutes as "accessible", but some of the tunes on Foundations of Burden are downright hooky, and vocalist/guitarist Brett Campbell's voice, which can hit the Sabbath—era Ozzy notes that the man himself hasn't been able to in decades certainly helps as well. Were they to cut some of their more ambitious instrumental sections and give more priority to their choruses, it's not hard to imagine Pallbearer receiving some crossover rock radio play in the same way that bands like Mastodon or Clutch have done. However, the group clearly have no interest in that, and are deeply ingrained in doom metal tradition. What we get here are very long, very slow songs, surely to alienate all but the most patient of listeners. Those who choose to stick it out will be rewarded handsomely, however.

There is no shortage of guitar wizardry on Foundations of Burden, but the group moves in such a deliberately paced way, and the long, extensive solos always serve the song, and never come across as showy. The guitar tones are absolutely gorgeous throughout the duration of the record, as well. It's difficult to imagine how many tracks are going on here, but it sounds like a lot more than four people are playing most of the time.

The shortest track on the record by nearly five and a half minutes is also perhaps its most ambitious, and definitely its most unique. "Ashes" is a three—minute pop/folk tune, with equals measures of melancholy britpop and Pet Sounds influence. There's some rumbling Tony Iommi—esque guitars present, but they're buried under untold amounts of clean guitar tracks. It's an experiment that completely succeeds and will hopefully set the stage for even more musical exploration in Pallbearer's future.

Other than "Ashes", however, Pallbearer hasn't strayed too far from what they were doing on 2012âs Sorrow and Extinction, and that's a good thing. They've gotten better at what they do, and stretched their legs just far enough to see what they can get away with. NOBODY is doing doom metal better than Pallbearer in 2014. They have respect for the genre's traditions, but aren't afraid to bring in outside influences, as well. As long as their attention spans can accommodate the extremely lengthy tunes, any fan of heavy music would do well to pick up Foundations of Burden. Highly recommended.

Transplants: In A Warzone