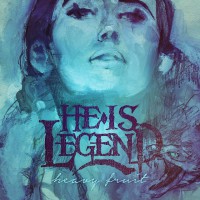 With 2009âs It Hates You, Wilmington, NC rockers He Is Legend streamlined their approach, throwing hooks on top of hooks and delivering an immediately catchy, surprisingly poppy hard rock record a million miles removed from the metalcore chugs of their early work. Half a decade on and the group are back with an even bigger left turn. Following a brief hiatus, He Is Legend 2014 have returned with Heavy Fruit. Heavy is the operative word here as the group have crafted a sludgy, often psychedelic beast of a record.

While He Is Legend's early work appealed to fans of groups like Every Time I Die and Norma Jean, the tracks on Heavy Fruit come from somewhere dirtier, heavier and more timeless. Opener "No Visitors" roars across like Pepper Keenan—era Corrosion of Conformity, right down to Schuylar Croom's deep bark. It seriously sounds like a spiritual sequel to "Vote with a Bullet." On the other end of the spectrum, tracks like the spacey "Miserable Company" suggest that the group have been listening to lots of Kylesa, while "I Sleep Just Fine" falls firmly into Isis territory. It's a cliche, but Heavy Fruit really feels like the group's most mature work to date.

The anthemic choruses that marked He Is Legend's work are still present on Heavy Fruit, they're just buried under sludgier riffs and extended instrumental passages. It's a much less immediate approach (really, the polar opposite of what they were doing on It Hates You) and one that asks more of the listener, but rewards repeated listens.

The gap between It Hates You and Heavy Fruit represents almost half of He Is Legend's career thus far. As such, it's not entirely surprising that they made such a unique record, but even in their more prolific years, they were never a band content to make the same record twice. This record will appeal to fans of sludge/stoner/doom and so called "hipster metal" as well as longtime listeners willing to accept that each He Is Legend record is a different experience and come along for the ride.