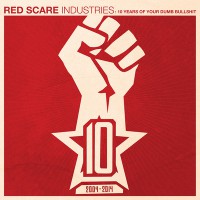 Red Scare Industries has given the punk scene a lot over the ten years the label has been around. Some of the early bands that were signed to it have gone on to become huge names in the punk rock community. To name a few: The Menzingers released their second full length on Epitaph Records; Masked Intruder released their second full—length on Fat Wreck Chords; and Teenage Bottlerocket just signed to Rise Records after being on Fat Wreck Chords for a few years.

To be able to spot talented bands, invest in them, and see them become more and more popular for a decade like that is quite an accomplishment. And to commemorate the ten years that Red Scare has been around the label has decided to put out Red Scare Industries: 10 Years Of Your Dumb Bullshit that is filled with brand new material from all of the bands who participated.

Brendan Kelly was clearly very busy because he was a part of two contributions to this compilation. Interestingly, you get one of each kind of his vocals (raspy and high—pitched) in each of the songs. He and the Wandering Birds feature on the comp with the song "Gluesday Evening Blues," a fairly gloomy and sadder sounding song with Brendan's more raspy vocals. And his other band, The Falcon, contributed a song (the band's first in about eight years) called "We Are the Bald," where you get his more high—pitched/yelling vocals. It's faster and is one of the more hardcore—sounding songs he's written. But it's very cool to hear the opposite ends of Kelly's range on one album from two different bands.

Kody Templeman has also been busy preparing for Red Scare Industries: 10 Years Of Your Dumb Bullshit because both of his bands, Teenage Bottle Rocket and The Lillingtons, contributed songs as well. From The Lillingtons we have a pop punk, science fiction—based tune called "Pyramids," which is about the ominous threat that the pyramids on the moon pose to Earth. And from Teenage Bottle Rocket, there's a song with their signature "Ramone—core" sound called "TV Set," which is just about how awful and depressing the world looks right now when watching news.

What also makes this compilation pretty special is the Cobra Skulls' track because they recently broke up and this is the last song the recorded. The track is called "No Puede Mas" and this song has a pretty trippy guitar riff throughout it. There also seems to be Spanish theme, not only because of the title, but also because the drumbeat has kind of Latin feel to it and all of the lyrics are in Spanish.

Direct Hit! have added yet another song about fictional beings like Satan, werewolves, and religious cults to their catalogue with the song "Bad Trip On Holy Ghost." This song has the anger, humor, and in—your—face and "Fuck You" attitude that we have come to love from Direct Hit! But this track also has a killer guitar solo and some well—done, almost chorus—like backing vocals.

The song that Reaganomics have put onto this compilation, although a very catchy and rockin' tune, puts more of an emphasis on the message that's in the lyrics than instrumentation. The song is called "Bite Your Tongue" and its about how they admit they don't know a lot about religion, politics, economics, etc., and they're alright with that and they're sick of people trying shove their viewpoints down other their throats. Interestingly enough, they make no distinction between people who try to impose their left wing or right wing views on other people. They just want people to shut up and stop doing that, hence the title "Bite Your Tongue."

Other labels, take note— this is how you make a comp. Red Scare Industries: 10 Years Of Your Dumb Bullshit has all new material for the fans of the label all while giving new prospective fans an introductory taste of the great music Red Scare has been releasing over the years.

Deafheaven: From the Kettle Onto the Coil [Digital Single]