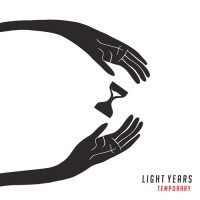 Temporary doesn't feel like that much has changed or like that much has grown with respect to Light Years' last record. I Won't Hold This Against You was a tight, melodically sensible pop—punk effort last year that really felt like the band was ready to take the next step forward. Why? Because they showed diversity and range outside the poppy arena. This new EP feels like they've made small steps in the right direction but not as big as most would have thought. That minor quibble aside, they're still a band that's on the cusp of that big leap because of their musical dynamic which you can't help but be optimistic about. The five tracks on hand here feel more exposed and freer —— and this vulnerability is where they shine most —— especially when they bat outside their comfort zone.

Following up from 2013, they start off sticking to their pop—punk guns and make no mistake, it's a sound they do well. Laced with cracking drums, the faster and more hectic self—titled track acts as a great gauge as to where the band is now. Kit—driven yet very melodic and a bit edgier. While they seem to be more comfortable on the poppier side of things, it's when they steep themselves into more heavy waters that I see their potential stand out. Which is why I want them to jump out of these cages.

"Late At Night" and "Wandering" are prime examples of this, with the former coming off as a pure—rock '90s guitar—steered piece of magic. It's one of their best to date and these two tracks really build a great sense of emo and grunge. The instrumentation's so straightforward yet harsh when you compare it to the bulk of their work. Pat Kennedy's lighter vocals, while contrasting to these sounds, do fit the tempo of the band pretty well though and it's this dynamic which I mentioned that seems to be working so fucking well. I waited for when they'd come off immiscible but I was kept waiting. And waiting. Like I said, they blend together and complement each other pretty neatly.

Overall, Temporary has the legs to show why Light Years deserve more time in the limelight but it's still a tough call as it lingers in the shadow of an impressive 2013. Is it a good template moving forward? Yes. Is this progression evident in the majority of tracks on offer here? I'd go out on a limb and say yes. Not as much as I'd have liked, but yeah, it's there. They're exploring but I wanna see more. I think they need to cut some more of those pop—punk chains and really let loose. When they do so in snippets, it's really amazing. Tinker with this a bit more. You can already tell it'll be an even bigger winning recipe.