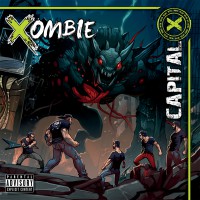 New York's Xombie are one of the Big Apple's leading "hood metal" groups, a five—piece sledgehammer of a band that combine the scattershot rap stylings of Rage Against The Machine with the dark, relentless riffage of System Of A Down, via a healthy dose of Pantera. It's a take—no—prisoners sound, a dynamic, super—tight offshoot of nu—metal that resonates with the fear, frustration and uncertainty of modern urban living.

Xombie's debut album, Capital X, was released in July, and lead single "Rock Bottom" is a bone—crunching face—melter of a track, an ode to those moments when the city has taken everything from you but the clothes on your back. The accompanying music video, directed by "Requiem For A Dream"'s Oren Sarch, stars world—famous backyard brawler Kimbo Slice and depicts an illicit underground fighting den in which enormous, muscle—bound men pummel the living crap out of each other while over the top rage Xombie's chunky, super—charged, pile—driving riffs.

Refreshingly for a group this heavy, Xombie clearly care about songwriting, evoking at times the melodic sensibilities of Linkin Park —— particularly in the use of backing vocals in "Miss Behave." Another highlight is the appropriately titled "Rotten Apple," which begins like golden—era Metallica but evolves into a frenetic rap telling the story of life in the darker parts of New York City.

Speaking of which, Xombie's lead vocalist and rapper, Adam Cruz, makes no bones about the inspiration behind Capital X, revealing that the record tracks the band's complex relationship with their hometown. "New York can be the most unforgiving place in the world if you let it beat you," he explains. "But if you keep playing the game, eventually you'll win big. That's what this album is aboutâ¦"