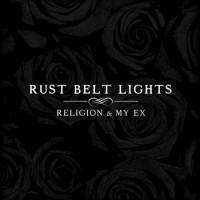 Rust Belt Lights proudly hail from Buffalo, New York, a city that has seen better days. The band plays an energetic blend of up—tempo punk rock with polished hooks and melodies, a style of music that has also seen better days. But for those of you who are maybe like me and not into the current mid—tempo rock stylings of the current bands du jour, then Rust Belt Lights should qualify as welcomed bright spot on your radar. They first caught my ear in 2010 with their debut album on Paper & Plastick called These Are The Good Old Days, a collection of fast, fun tunes in the vein of Lifetime's classic Jersey's Best Dancers or even early Saves The Day.

The sophomore effort has now arrived in 2014 with Religion & My Ex on Adeline. The first thing I noticed is simply the band's name in what would pass as white Times New Roman font centered on a black jewel case, with an extremely faint dark grey rose(?) in the background; a far cry from the high—res cartooned masterpiece that packaged the debut. Luckily, it sounds better than it looks. The opening track "Wasted Wishing" starts things off with an energetic blast in the right direction. The sound production is crisp and clean. The guitars are loud and crunchy. Lead vocalist Zach Dietsch can be heard from what sounds like a mile away and the group backing vocals on the choruses give things an extra kick. Most of the lyrical content focuses on real life and is generally relatable for the majority of listeners. However, I do find that parts of the album are a little bit too polished and leave me wanting the rough around the edges feel of their previous effort. Another con would be that a couple of the songs go on about 30 seconds too long in my opinion. But there are definitely standout tracks that make me hit repeat: "How to Live Without", "Parkside" and "Stay Young or Try Dying" are all beefy bangers with solid melodies. While at first I wanted Religion & My Ex to be very similar to These Are The Good Old Days, I have abandoned this stance after a few listens and continue enjoy it more and more each time through, but at this point I would still give the slight edge to the older material.