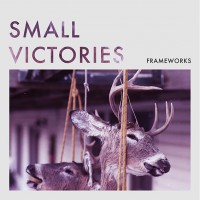 Reissuing Small Victories was a big plus for me as a fan of Frameworks because it gave me time to address something (I'd call it minor conflict and healthy debate) I ran into with fans of the Gainesville posse. Loom earlier this year stood out to me, and still does, as one of the most brutal and powerful records that 2014 may well see. However, a lot of their followers stuck to their guns that it wasn't as good as this release in 2013. It really struck me because Loom felt like Frameworks unlocked a huge chunk of their potential and overall, it came off as more complete, exploratory and experimental. These characteristics were always present in the band but again, Loom to me unfurled their sound in full. That said, Small Victories will stand out no matter what, as the stomping grounds and necessary foundation that imparted knowledge on where they should head next. A brilliant gauge to say the least. They cultivated their immense sound, cutting teeth here via a mixture of rough post—hardcore, caustic hardcore and abrasive screamo that threw them up there alongside Pianos Become The Teeth, Departures, Caravels and The Saddest Landscape.

They never shied away from blistering melodies influencing the core of their sound and "Ida" is a prime point of reference. It feels grainy yet a notch above most other screamo/post—hardcore offerings. I think the dynamic guitars and intricate riffs really help to groom why this song sticks. Particularly because the instruments meticulously layer this intro as a spine for the rest of the tracks. In just four tracks, you easily and quickly capture the sense of urgency in their music. Not to mention clever storytelling in their lyrics. It feels poetic at times. But then again, that's how most of their music comes off. Vulnerable and exposed. There's a sense of earnestness in the words on tap, quickly throwing back to bands like State Faults, who balance such furious, rage—filled instrumentation with shockingly soft prose. "Sewn" reiterates everything I just mentioned but in its own nature, as noisy as it gets, feels so differentiated from the rest of the record.

"Old Chokes" is probably the best song from them. Well—paced. Stopping and starting. Fast and furious to lulls. Hard—hitting kit work. It feels like it fucking has everything needed to be the best in the genre. Even the horns which would usually feel out of place here manage to work. Now where this album seems a tad weaker than its follow—up is that it feels more narrow in range. Don't get me wrong. The four tracks stack up as diverse to each other but when weighed against the more open, liberal Loom, it's slightly confined. However, if it's one band that can't be shackled, it's this band.

They've got something special that distinguishes them from the lot and definitely showed how quickly they can ascend small stepping stones like Small Victories. In its own, this concise collection feels like a cold bucket of water in the morning. It's invigorating and shocks you into life. Personally, hearing this blossom into their 2014 disc was, and continues to be, a huge reward for a bunch of guys I can't wait to see take it to the next level. With some split work coming up later this year, Frameworks continue to show why they should be on your radar. They've been busy as hell but it's paying enormous dividends.