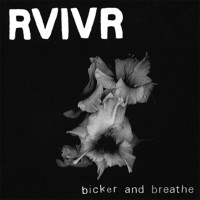 Over a year later and I still can't get "Paper Thin" out my head. The Beauty Between cemented itself as the RVIVR record I was waiting on —— stamping its authority as one of their most ambitious and energetic punk diatribes to date. But more so, it really felt like the most wholesome piece of work in their catalog and one especially meant to leave its mark on doubters who felt they weren't living up to their billing. Bicker and Breathe not only unravels like a marvelous continuation of last year but as a sequel, it combines little new intricacies they've been toying with recently as well as the components from their old stable of work which made RVIVR who they are today. Ultimately, it's a great blend of new and old and in doing this, you've got another punk—prolific and beautifully constructed gem on your hands.

In just five songs, you're reacquainted with their core and overall vibrant essence. If you're a newcomer, then you're slapped in the face pretty hard and pretty good. "20 Below" and "Goodbyes" bring the tension RVIVR are known for musically with speedy pop—punk and shredding solos unfolding at all turns. As aggressive (but not necessarily loud) as ever, each second feels like an incremental build to something bigger. Usually, the payoff comes with the crescendos of "whoas" ripping through the guitars of vocalists Mattie Jo Canino and Erica Freas. Hearing Freas blurting 'We don't wanna get good at goodbyes' on the latter shows how much she's improved as a singer (and she's always been impressive) but it's nice to see Canino stepping up his game as well, singing more and getting into the more melodic vein of things. The last couple albums had parts that felt too segmented —— like it either had to be him or her singing —— and usually I'd lean to Freas. Now, they both work in tandem so well.

They allow each other time to breathe and take turns in upping the dual dynamic when need be and then there are times when their contrasting styles clash in the best way possible. They've really figured out how to mix and match. The self—titled closer is another example of this and brings to mind a sense of how much more flowing RVIVR's become. There's more continuity to their music. Not saying that they need that much stability to their volume but inevitably, as the past two releases have shown, it's awesome to see some sort of uniformity in their brand of punk as it dances in indie tones from time to time.

While Freas adheres to her usual delivery style, Canino feels less improvised and much more confident —— helping the mid—tempo jam "In Waves" come alive. He doesn't hold back at all which pushes Freas on the "The Sound" even more. These can be seen as the slower interludes on the album but what they also represent is the boldness of RVIVR and more so, the fact that you can't typecast them. They're unpredictable. Unique, even. Their rhythms and melodies are cleaner, their noisy riffage feels more organic to their consistent shifting of sounds and these all help clarify one thing. RVIVR's a balancing act that few can imitate. Big statement right? But true. If this EP is a hint of what's to come, then they may well be prepping to do the impossible and top The Beauty Between. After hearing this record, I'm betting they can...and they will.