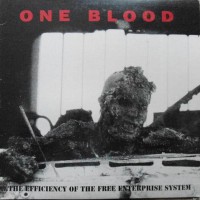 In an underground style of music like punk rock, we all know someone who claims to have the definitive record collection. Whether it's your buddy who scavenges every dollar bin in town, or the cantankerous old regular at the local dive bar who recounts how he saw 999 back in 1980, I think most people can pick out someone like this in their own scene. Well, here is the record that will silence even the most accomplished vinyl junkie: Building a World of Prosperity with the Efficiency of the Free Enterprise System by One Blood.

One Blood were a short—lived, little—known, multi—racial hardcore punk band from Toronto, active during the late 1980s and early 1990s. Even with today's savvy search engines, there is almost no digital trace of this band's existence. I am fortunate enough to have an older brother who was able to catch the band live a few times way back in the day, thus awarding me with access to an original copy of Building a Worldâ¦, the band's only full—length release.

The cover of Building a Worldâ¦ is aggressively thought provoking to say the least; a headshot photo of a dead Iraqi soldier, burnt to a crisp mid—pose, while trying to escape a truck, with the band's name at the top in fire engine red. Accompanying the record is a 12—page, double—sided, newsprint magazine that not only presents the lyrics to each song with customized handmade artwork, but also contains several political periodicals related to the ethics carried by One Blood. This is simply not seen in today's standard lyric inserts. It really adds to the experience of sitting down with an album and getting a sense of what a band is about. Adding to the obscurity factor, the album is the very first release for Gern Blandsten Records out of New Jersey, who would later go on to release material by much more well—known bands like Weston and World/Inferno Friendship Society.

In terms of how it sounds, Building a Worldâ¦ starts off with a harmonica line played alongside a voiceover recounting the Mohawk standoff at Oka â a significant event in early 1990s Canadian politics. Just when the listener has no idea where "Indian Summer" is going, an up—tempo military beat kicks in and then we're off to the races with some hardcore punk rock played so frantically and delivered with such earnest vocals it's impossible not for me to get a chill when I hear the last line of the song: "So what you do to one of us, you do to us all!" Each song that follows is slightly different, proving that the band do not simply repeat their arrangements. More political voiceovers are featured on "Make The Links" and it works well. "Reform Party" and "Safe" are hardcore bangers in the vein of Minor Threat. "Can You Feel It?" is a creeping momentum builder that features a toast declaring the band's ethos of "Commitment, heartfelt feeling and energy!" The Fat Wreck Chords—esque sounding tune "The Heat Is On" tackles ozone depletion. "Guardian Angel" storms its way through in favour of women's rights. The closer "Opinion Control In The Democracies" burns the pace down to a slower jam accompanied by more political commentary.

There are three main reasons why I believe Building a Worldâ¦ by One Blood cannot be given anything less than a near perfect score. First, the band was playing a hybrid style of punk and hardcore that was just a little too far ahead of its time. Yes, fans of Minor Threat could definitely get into this but 1991 was before the Fat Wreck Chords and Epitaph wave hit it big. Bands like Strike Anywhere, Good Riddance and Anti—Flag essentially went on to carry this same torch to the masses. Thomas Barnett of Strike Anywhere can be heard in an interview on Canadian college radio describing the passion he felt when he heard "Indian Summer" by One Blood for the first time. Second, the gripping artwork and inclusion of the newsprint magazine give the listener a complete and proper album experience. Third, the messages â political and otherwise â put forth by the band without any artistic compromises whatsoever, even at risk of alienating those not into overly political content, are inspiring to anyone who appreciates musicians standing behind their beliefs.

One Blood lit the fuse of what would become the popularized punk and hardcore blend championed by later contemporaries. Building a Worldâ¦ is a piece of gold that the record collector aficionados unknowingly left behind.

You can check the record out here.

High Dive: These Are Days