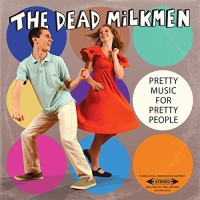 It's been close to thirty years since The Dead Milkmen first came out of Philadelphia with their own satirical brand of punk rock. Debuting in 1985 with Big Lizard in my Backyard, music fans were treated to jangly, raucous tunes about small town politics ("Tiny Town"), freedom of personal beliefs ("Swordfish"), and the classic tale of youthful entitlement that is "Bitchin' Camaro." It was hard not to be taken in by their snark and wit, and fans who were in on the joke would laugh at the jabs that Rodney Anonymous and co. were throwing at the landscape of the time. In 2011, the band released their first collection of new music in over 15 years, The King in Yellow. It was good, but something was off. It's back on with Pretty Music for Pretty People.

Opening with the title track, longtime fans will immediately recognize the swirling cacophony of classic Milkmen. "Pretty Music for Pretty People" starts with a whispered intro, later bursting into a song that would be fitting at a carnival or circus. Weird voices make up the backing vocals with Anonymous' yowl sounding just like it did years ago (heavy Philly accent and all). The song, which Anonymous describes as a new reality "where the Beatles had lost the war and the Velvet Underground had won, a world where Billy Joel could never get into the Rock ân' Roll Hall of Fame but Kevorkian Death could," is an instant Milkmen classic.

Followed by "Big Words Make the Baby Jesus Cry" and "Welcome to Undertown," the old fan will be immediately comforted in knowing that the band they loved for so long has remained true to their sound. People checking out the band for the first time will smile with delight as the album relies heavily on what made fans love the band so much in the beginning; short songs with simple hooks and lyrics sometimes bordering on absurd, but almost always with a second, underlying meaning. "The Sun Turns Our Patio Into a Lifeless Hell" is less about the pitfalls of home ownership and more about painting a dark portrait of life in the suburbs.

"I don't care what you do but I care how you do it," Anonymous wails on "Make it Witchy." The track, a fuzzy, hyped—up tune, is a highlight, along with "I've Got to Get My Numbers Up," another Anonymous screamer. The fuzziness continues with "The Great Boston Molasses Flood," where Dean Clean's drums plod along as quickly as the namesake flood certainly would, with "sweet sticky death headed my way." As usual, the tracks where guitarist/vocalist Joe Genaro (Joe Jack Talcum in another life) takes over tend to be a bit softer and, dare it be said, prettier, with "Mary Ann Cotton (The Poisoner's Song)" and "Somewhere Over Antarctica" standing out in particular. The album closes with "Little Rebel Mine," an eerie, slow duet between Anonymous and Audrey Crash of Ex Friends (the song originally appeared on Rome's 2011 release, Die Ãsthetik Der Herrschaftsfreiheit, and lets Anonymous veer into Genaro's "prettier" territory).

It's 2014 and the Milkmen are back, baby! They have taken their classic sound and expanded it a bit, making a modern, yet instantly recognizable album by the masters of punk rock satire. The King in Yellow may have heralded their return, but Pretty Music for Pretty People is the album where The Dead Milkmen truly make their triumphant recorded comeback. Recommended.