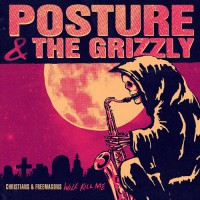 Posture and The Grizzly

Christians and Freemasons Will Kill Me (2014)

Posture & The Grizzly are the biggest gem I've unearthed this year. They quickly shot to the top of my list with Busch Hymns last March as it incorporated various melodic and indie elements into one of most daring and don't—care punk frenzies of 2014. So catchy, so immature and so good. I said it then and I'll say it again — this band is like State Lines meets Joyce Manor meets a lot of fucking alcohol. While the album mentioned above prides itself on speedy—punk with badass attitude, Christians and Freemasons Will Kill Me is a much slower and deeper breath — draped over a boatload of issues. It's still melodic and indie...but this time in a more emo realm. With just three songs, the big sell here is how diverse Posture & The Grizzly get and as much as these songs feel like discarded B—sides, you're left wanting a full record flowing off these tunes.

These songs feel so raw and dirty in sound but they're an added treat. They continue to spew about the heavier content in life and this time around, the slower beats ensure the music's jaded sense of appeal and overall cynicism hit home. Hard. "I Am Not A Real Doctor" definitely feels like a straight—up pull from an angry kid's diary after a break—up. Then again, that's the entire vibe of Christians and Freemasons Will Kill Me. If you think I'm kidding, just wait until the finale of this tune. The melodic nature barrels into a Mineral—esque finish that reminds me so much of "February". Good stuff, indeed.

If you somehow couldn't pick up on it, "Mandy" more or less sells the plot out as a record for a broken heart. It has a ballad—esque feel that brings out a lot of distress. It's one of those tracks that have you feeling sorry for the poor sap this shit happened to...but then you realize, it also happened to you. The vocal distortion here adds another layer of anguish as it feels like hearing someone breaking down, reminiscing of what was lost. Another emotional wreck from a band that does emotional wrecks so well. And to top things off, if you're looking for the symptoms of how fucked up shit gets when you're left high and dry, then "Kill Me" posterizes them. It starts off with a cute acoustic beat before delving into a garage—demo cadence that quickly leaves you frustrated and angry. It talks about insomnia, drugs and suicidal thoughts when your significant other leaves and as a closer, it really stands out as a sharp contrast to "Jordan Michael's Space Jam" which ended their last record on a higher note — one of optimism, romance and longing.

I can only surmize that between last March and the recording of these three songs, someone endured a massive heartbreak. Lingering in its dramatic and sad tone, Christians and Freemasons Will Kill Me feels like therapy. But it also feels like a note scribbled by someone desperate and very shattered. Like I said, emo. To the very core. But understandably so. It's a nice change of pace for a band that definitely will be going places and hopefully, you guys catch them at The Fest 13. Don't sleep on them!