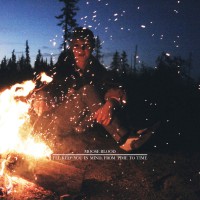 Moose Blood definitely verge on the poppier side of the emo genre —— or what people would call "emo—revival." Or maybe what some strange people would call "weiner rock" or "fake emo." Their debut EP, Moving Home, received lots of attention and hype in the UK where they quickly became one of the most talked about bands in the scene.

Now, I'll Keep You In Mind, From Time to Time sees the band take everything they've learned from their EP, their singles and their splits, and cull all of the unnecessary stuff, and build tremendously on everything which works.

Kicking off with stunning ballad "Cherry," the record sets itself up early to be different, a bit unique. It moves quickly into the heartfelt "Anyway" which shows off the band's new, perfected sound. There are more twinkly guitar parts, more subtle effects and more feeling.

While Moving Home was a stellar release, at times it felt a bit forced. The shoe—horned—in references to every popular emo band of the late '90s/early 2000s for one. Gone are the American Football and Brand New name drops. There's still a lot of talk about lying around listening to your favourite bands, but this time it feels a lot more genuine and believable rather than trying to earn cool—points.

"I Hope You're Missing Me" and "Chin Up" show off the band's ability to write incredible choruses, catchy and full of feeling. "Pups" builds masterfully into a massive finale. "Bukowski," the highlight of the record, is simply wonderful: emotive guitar—work, a stupidly catchy chorus, a powerful outro.

Closing off with slow—burner "I Hope You're Miserable," the depth of the record shines through. There are fast moments, slow moments, catchy moments, sad moments, happy moments... You get the idea. The punk and emo influences weave together to create something which is slightly undefinable, but definitely fits somewhere near a UK Jimmy Eat World or early Brand New. There's a lot of range for a band who originally felt slightly one—dimensional. The record is an incredible release start to finish.

Punch: They Don't Have to Believe