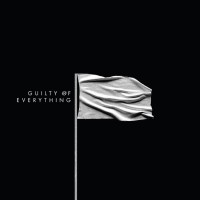 Nothing is one of those bands that metal fans would probably be pissed at for floating around their venues if not for the dark, blustery post—metal sound they neatly craft. It's a craft that battens down the hatches and manages to swim with the loud, heavy yet never aggressive acts like Alcest and to a lesser extent, Deafheaven. They have one of the most intriguing musical narratives around. It's not that they're reinventing the wheel but as Guilty of Everything shows, they make beautiful art out of introspective melodies, gutwrenching shoegaze and explosive crescendos.

The way they blend fuzz, feedback and heavy distortion is nothing short of magnetic. Unlike Alcest, they manage to keep things fresh. I really love how they keep the songs shorter at around four minutes on average just to ensure they don't run the risk of going stale. "Hymn To The Pillory" and "Dig" are the best representation of this. The self—titled track further breaks this point down and by then, amid all the psychedelic madness and distorted dream—pop being worked in, you can safely say Guilty of Everything is toned—down black metal. "Somersault" is another dark yet captivating dig at you. It brings a dramatic feel to Domenic Palermo's lyrics, which are at times too whispery and very difficult to grasp — yet somehow they fit the music. A lot of this can be attributed to Brandon Setta's eclectic guitarwork. He sets the mood for a lot of what's to come.

Nothing feels like a band conditioned to take the best out of Smashing Pumpkins, My Bloody Valentine and Jesu and concoct something that's even more driven. What this does is reinforce that Nothing don't settle. They're not about safety nets or comfort zones. That's a great place to be. Especially when you're capable of touching various genres so well. Don't sleep on this record. At all.