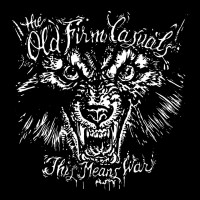 I have always been a fan of Rancid and most of their related side projects. During the peak years of Hellcat Records a little over a decade ago, I thought Lars Frederiksen & The Bastards was a great band who embraced a traditional street punk sound. For my own ears, Lars Frederiksen's voice has always been one of the most reliable in modern punk, so I was pretty excited when his new skinhead band the Old Firm Casuals released their first self-titled 7-inch EP back in 2011. However, the lackluster demo tape sound quality heard on that release promptly turned me off with little to no hunger for more. Luckily in 2013, the band released the much improved sounding For The Love Of It All... and were able to win me back with a solid collection of boot stomping bangers compiled from their varied catalog of singles, splits and limited release items.

2014 brings us to the Old Firm Casuals first proper album This Means War, a shared release from Oi! The Boat Records and Randale Records. There isn't much to debate here: the listener will either immediately love or hate this record. After the quick instrumental intro "Langskib," the band rips into the title track with a fury of heavy riffs, fast beats and notably pissed off gang vocals. The lead single "Perry Boys" is up next with some traditional harmonies and call-and-response chorus breakdowns. Lars' voice is a clear strength and really fits well throughout the album. There's also no worry on the sound quality side of things as everything rattles and rumbles along with great production value.

During the middle portion of the record I found my fists came unclenched for "Never Say Die" as it sounds a little less rough and rugged in comparison to the other rippers. Chosen as the theme song for the San Jose Earthquakes of Major League Soccer, I guess some commercial appeal had to creep in. The guitar-only track "Eternal City" also slows things down a little, but is not totally out of place. Things get ramped up again with a few more knuckle bangers including "Apocalypse Redux" which is a much needed redo of "Apocalypse Coming" from the aforementioned self-titled release.

Overall I think this batch of songs is well written and performed with great energy. However, I won't ignore that there are a large portion of listeners who won't be down with the gang violence theme of this record. The title is violent. The cover is violent. The lyrics are violent: the chorus during the track "The Dear Leader" is simply "There's gonna be violence!" I would agree that these songs aren't providing any thoughtful, inspiring messages to the listener, but nonetheless I think it works well and I am not bothered by the content.

Much like fellow Rancid member Tim Armstrong's In A Warzone by the Transplants last year, This Means War carries some important qualities that earn it a higher than average rating. Like Armstrong, Lars is an accomplished and commercially successful musician. He does not need to be making a violent skinhead album with little to no commercial appeal (outside of the San Jose Earthquakes fanbase). Clearly, he is doing this out of his own love for the music and it's inspiring to see someone at his level make the decision to record music that they truly want to without any compromises. It also feels good to clench your fists every once and a while.

Sick Of It All: Last Act Of Defiance