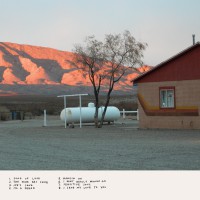 Cassie Ramone's first proper solo LP has been a long time coming. Rumors of a solo LP began just after the first Vivian Girls LP and a track here or there were leaked into the world. But, the first solo release was aborted and Ramone went on to form another band, the Babies. Now, with the Babies on hiatus and the Vivian Girls officially over, Ramone has finally released her first proper solo record, The Time Has Come.

Because Ramone either invented, or was extremely important in forging the Motown-meets-punk sound, and because the solo LP has been gestating for nearly five years, its tempting to put a lot of emphasis on the new record as Ramone's definitive statement. But daringly, that's not what The Time Has Come seems to be. Ramone has frequently defied definition and she does that here, too. In lieu of grand, polished statement, Ramone turns in eight tracks that feel both organic and purposefully raw.

For the release, though, Ramone does rely on her key strengths. As always, she's able to create sounds that are both ghostly and sweet. On the tracks, her voice is hidden behind a thick, monotonic wall of jangly garage rock. While that affect has been done before, Ramone is impressive at how she's able to make the whole package seem so alien. Her voice sounds ethereal and vaporous, which makes the whole thing reminiscent of classic Cure and Siouxsie Sioux.

Likewise, she masterfully flips from sunny tracks, like opener "Song of Love" to utter melancholy, "I Don't Really Wanna Go," which also has a pretty clever twist ending. Ramone is a big fan of tarot reading, and her interest in the alien and occult is hidden here between what seems like standard garage tune themes. This makes the songs that much more amorphous, and frankly, interesting.

"Joe's Song" is really the only track that charges along like early Vivian Girls and even then, it pulls off the gas and Ramone focuses on thick, but sweet, shoegazey guitar lines. By contrast, "The Time Has Come" is a sparse, almost Neil Young-style funeral dirge. It's cold and creepy and shows that, really, Ramone, who appears as a friendly, nice young lady can get as heavy as Peter Murphy or Gee Vaucher.

The tracks do share a similar aesthetic -- the ghostly sounds and focus on texture and broad movements as much as notes. But, each song seems to have been thought of in an instant and recorded a few minutes later. That's not a bad thing, either. If anything, Ramone is at her most effective when acting as a channel for the muses and too much planning could sink these flights of whimsy.

The flip side of that, is that there is no definitive statement of what Cassie Ramone's music is, or will be, in the future. But, really, it appears that this will be the path that Ramone will follow for some time. For example, you can describe Motorhead's discography in two sentences, but the Slits or Liliput? Not even a book could really capture everything. Like her music, Ramone appears to favor the amorphous. It works.

We Were Promised Jetpacks: Unravelling