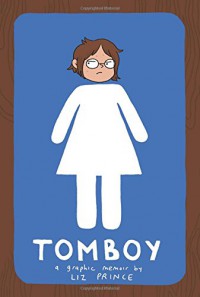 If you're a fan of Liz Prince's work, then you already know that "Tomboy" is Prince's first foray into full-length graphic novel territory after years of churning out comics on the Internet and in the pages of publications like "Razorcake." Like much of Prince's output, it's a highly personal story. In this case, the story is a memoir of Prince's childhood, adolescence and teenage years, told through the prism of a girl who isn't interested in being a girl.

For anyone familiar with Prince's comics, the presentation is once again based around her familiar artistic style, with the kinds of diagrams that regularly run in "Razorcake" helping us to understand Liz Prince the tomboy at various stages in her development. She also effectively breaks the fourth wall when necessary, as Liz Prince the author chimes in to provide clarity and context when needed.

So what makes "Tomboy" different from the average coming-of-age tale? For one, it doesn't pretend to be a metaphor for the overall concept of "coming of age," it's simply one girl's story, and it's an interesting story, because it feels so real. It's clear to the reader pretty much from the start that characters, situations and myriad late '80s and '90s pop culture references aren't contrivances used to create the perfect setting, they're the life that Liz Prince has lived. She didn't make up the idea of a young girl having a thing for Ghostbuster Egon Spengler, she was the young girl with the thing for Egon Spengler.

This idea carries through as the story develops and Liz finds herself in the awkward, complicated situations that teenagers tend to find themselves in. Not to give too much away, but boys are involved. So are bullies. So are friends who turn out to not be very friendly. And all of this takes place as Liz struggles to understand her place in the oversimplified boy-girl duality. To the reader, it feels less like a story and more like a friend telling you about the twists and turns of her young life. It makes the "aha" moment near the end of the story, when Liz recognizes that her problem isn't being a girl, but the definition of "girl" that she and society cling to, feel all the more powerful.

In the end, "Tomboy" succeeds because it does what so few pieces of entertainment do -- it offers emotional satisfaction, and if things do turn out pretty much ok, it's not because the author contrived them to do so. Sometimes, things actually do work out in the end.

Today is the Day: Animal Mother