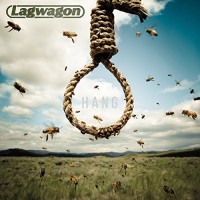 If you talk to anyone in the late 20s to late 30s demographic that is a fan of the offshoot genres of punk music, most will probably have a favorite band from the golden years of Fat Wreck Chords. NOFX would probably be the most common answer, followed by Strung Out who have always maintained a ravenous fan base. No Use For A Name certainly deserves mention as well. For me, and Iâ€™m certain thousands others, it was Lagwagon.

I wonâ€™t drone on about the bandâ€™s history; theyâ€™ve been around a long time and have made some very memorable records. Their last proper release in 2005, Resolve, remains not only my favorite Lagwagon record, but also one of my favorite overall records of all time.

Fast-forward to 2012. I had the privilege to interview Lagwagon vocalist Joey Cape on thePunknews Podcast. While pleased to hear the band was actively touring again, the tone of the conversation appeared to indicate a new full-length was not in the works. Luckily, that was not the case. In late 2012, the band announced they were writing for a full-length release.

Lagwagonâ€™s new record, Hang, is reflective of this stop and go activity of the bandâ€™s last several years. It has a very unforced feel, very natural and, for lack of a better adjective, very Lagwagon. It starts with the combined tracks (and second â€œsingleâ€) â€œBurden of Proof/Reign,â€ which exemplify the textbook sound of the band. â€œBurden of Proofâ€ serves as the acoustic intro, launching into the blistering â€œReign,â€ with itâ€™s bouncing melody; itâ€™s Capeâ€™s trademark vocals at their finest. If you were to play a song to a friend to describe the band, this one would serve just as well as a dozen others from their catalog.

Then thereâ€™s the riffs. And let me tell you, riffs aplenty. â€œCog In The Machineâ€ displays the shredding best, and with the pulsing rhythm section, the buildup to every chorus is like an explosion. â€œWestern Settlementsâ€ also puts you on notice, this is a heavier record, but still very clearly encompassing their trademark melodies. The breakdown choruses bounce in and out of blistering riffage. Riffs everywhere.

The standout of the album, â€œObsolete Absolute," clocking in at a lengthy 6:12, is a bit of a mini-opus for Lagwagon. With varying melodies and tempos it is exactly what youâ€™d hope for with a band as tenured and familiar with their sound. I can only hope Iâ€™ll get to see it live.

Hang is not the same record as Resolve, and thatâ€™s not necessarily a bad thing. Where the latter was a combination of raw emotion and somewhat reactionary, Hang is the product of a very experienced and talented band carefully crafting a set of songs. And theyâ€™re damn good. Add to the mix (no pun intended) the amazing production from Bill Stevenson and the Blasting Room and the final product is what any fan of the band will immediately love. If you disagree, take a few more listens, youâ€™ll come around.

Rancid: ...Honor Is All We Know