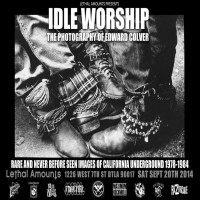 Iâ€™m going to let you know right now that this is not a typical review. I had planned on going to this photo gallery event to take a look at some pictures of the LA hardcore scene that were taken during the 1980â€™s. I got a whole lot more than just that. So the best way to review this exhibit is just to tell the whole story of my experience of going to Idle Worship: The Photography of Edward Colver.

On Saturday, October 25, 2014 I drove to Downtown Los Angeles to this small art gallery/skateboard shop called Lethal Amounts to see this punk rock photo exhibit. I park my car, I get out and walk passed this tall, older-looking fellow in a grey sports coat. There werenâ€™t a whole lot of people there. Maybe nine or ten. Granted, the exhibit opened on September 20 so it wasnâ€™t like opening night where apparently between 1,500-2,000 people crammed inside to see these rare photos.

The exhibit was showing and selling prints (very limited, only like three of each photo were printed and hand signed) of Edward Colverâ€™s pictures that he took of the LA hardcore scene between 1978-1984. Those were the peak years to be involved in the LA punk scene. As I was walking around admiring the pictures, I realized that I had seen some of these pictures either online and in documentaries before. There were a few of Jello Biafra and the Dead Kennedys at their show at the Whiskey A Go Go. There was one where Jello is trying to climb back on stage, escaping from the audience. There were pictures of Minor Threat in front of their van and performing, an amazing picture of Brain Setzer playing guitar at the very first Stray Cats show, pictures of Black Flag during their different line ups (even a picture of the band when Bill Stevenson was in Black Flag!) and a lot more.

There was one very powerful picture that really stood out to me though. It was a portrait of Darby Crash with a mohawk staring strait into the lens. It was really eerie and intense. Edward Colver took that famous Bad Religion picture where Greg Graffin is seen throwing a brick at a car window, he even took one of Greg Graffin and Lemmy from Motorhead together. I could go on and on, but you get the point. This guy documented iconic punk rock history!

So Iâ€™m about half way through the exhibit, until the tall man in the grey sports coats walks up to me and starts talking to me and telling me about the pictures. I just thought he was the curator or some other kind of official there. It wasnâ€™t until after about twenty minutes later that he introduced himself as Edward Colver! And then I introduce myself and told him that I was there to review the exhibit for Punknews. So of course my inner punk rock history nerd comes out and I start asking him all sorts of questions about the LA punk scene back then, we talk about old bands and new bands, and how he didnâ€™t get credited very often when his pictures were used either online or in films. He told me that he went punk shows five days a week for five years to take pictures and that there were a ton more and that these pictures were just the tip of the iceberg. The coolest thing he told me was that he was a self-taught photographer. It was just perfect to me that a great punk rock photographer built his success with the DIY ethic.

This couldnâ€™t have gone betterâ€¦at least I thought so. I realized that I had been at the exhibit for a little over an hour. It was about to close for the night so I thought I better just go home. I saw they were selling copies of Edward Colverâ€™s book called Blight At The End Of The Funnel, which is a book of some of his photos that were in the gallery and some that were not there as well. Itâ€™s a great souvenir and he was very nice to have signed it for me.

Then the unexpected happened. Edward invited me to dinner with him, his wife, and the gallery owner! So the four of us walked down the block to this little Thai restaurant and we talked about high school and college experiences, punk rock, and just had an overall wonderful time. Itâ€™s crazy and surprising adventures like this that totally give me a thrill. Iâ€™ll remember this experience forever.

But back to the exhibit itself. If you are in the LA area I highly recommend you check this exhibit out. I mean, come on! Even Alternative Tentacles and Amoeba Records are sponsors of it. How could you not go? Itâ€™s a window to a time that has long since passed, but is an incredibly important time in punk rock and musical history in general. We have Edward Colver to thank for that.

And if you arenâ€™t anywhere near the LA area, you can check out some of Edward Colverâ€™s work here.

Rancid: ...Honor Is All We Know

Pianos Become The Teeth: Keep You