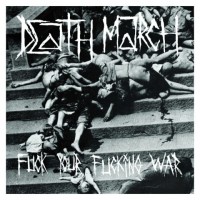 Since Iâ€™m a fan of Tim Armstrongâ€™s In A Warzone by the Transplants and Lars Fredericksenâ€™s This Means War by the Old Firm Casuals, I figured it was only natural to complete the war-themed trilogy from the Rancid camp with a review of â€œSkinheadâ€ Rob Astonâ€™s Fuck Your Fucking War by Death March. Coming out of the Los Angeles hardcore scene, Death March are fronted by the aforementioned Aston and backed by members of Societyâ€™s Parasites, a somewhat well-known Latino d-beat band with releases on Armstrongâ€™s Hellcat Records label.

Iâ€™m not entirely clear on how active Death March is in terms of recording or touring. Iâ€™m not sure whether or not the band is considered a side project. However, once I hit play on their 2013 7-inch release Fuck Your Fucking War, I knew I was hearing something fierce. Within the first three seconds of the opening title track I can instantly recognize the familiar sound of Societyâ€™s Parasites, which is a good thing. Aston wastes no time in barking his trademark gruff vocals over the crash nâ€™ bang hardcore style that the band executes to a tee. There really isnâ€™t much else to decipher here in terms of the formula; itâ€™s four fast hardcore punk songs with a lot of shouting. Not overly original by any means, but if youâ€™re into traditional punk then odds are this wonâ€™t be a concern. The total run time is just over five minutes, which I think is appropriate for this kind of release. As plainly indicated by the title, the lyrical content is far from positive and focuses on violence and death; definitely turn your ears elsewhere if you prefer more inspiring themes.

Overall, I think Fuck Your Fucking War is a great introduction to Death March. However, I remain foggy on whether or not this is just simply Aston shouting over what would have been new Societyâ€™s Parasites songs. At either rate, itâ€™s worth a listen for those who enjoy a quick blast of hardcore bangers.

You can give it a listen here.

Pianos Become The Teeth: Keep You