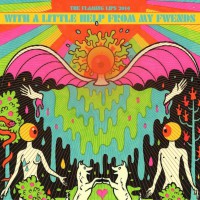 Cover songs are a natural part of a bandâ€™s evolution. Typically, they start in their garage, jamming on songs that they all enjoy from their record collections. Eventually, original music comes into play, and the covers are relegated to be an extra song in the live set or a bonus album track. The Flaming Lips, however, have done exactly the opposite. Instead of covering a song, they have taken full-length, classic albums and twisted them up, Lips-style. In 2009, Dark Side of the Moon went under the knife. In 2014, Wayne Coyne and Co., along with an army of guest musicians, have set forth to rip apart Sgt. Pepperâ€™s Lonely Hearts Club Band, entitled With a Little Help from My Fwends.

Itâ€™s a track-by-track reinterpretation of the Beatlesâ€™ classic. Much like with their version of Dark Side â€¦, the Lipsâ€™ take on the songs arenâ€™t so wildly different that you wonâ€™t recognize it. â€œLucy in the Sky with Diamondsâ€ (with Miley Cyrus and Moby), â€œWhen Iâ€™m Sixty-Fourâ€ (with Def Rain and Pitchwafuzz), and the title track (with help from Black Pus and Autumn Defense) are all interesting takes of the original songs, complete with the same kind of added histrionics that you would expect from the Flaming Lips. Any of these songs would have been great as a B-side or bonus track on another album. But redoing the entire album? Indulgent? Perhaps. Unecessary? For sure.

This is a record that only hardcore fans of the Lips will want to check out, and even then only as a lark. The purpose of the album is somewhat noble, as all proceeds from record sales go to the Bella Foundation (an Oklahoma City-based organization that helps provide veterinary care to needy pet owners). But, aside from the prospect of helping out a charitable organization, there is no reason for the average fan to pick this up. Here's to hoping that the 15th Flaming Lips studio release will be their own.