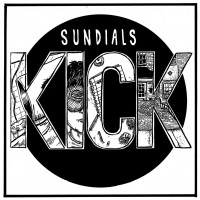 As someone who found Virginia's Sundials a bit overrated, it's a great feeling to be kicked in the face... by an album called Kick nonetheless. Their past body of work wasn't anything bad, by any stretch of the imagination, but for some reason I couldn't latch on. Parts felt too generic and uninspiring but safe to say, this EP shakes those cobwebs off and kicks things up a notch.

In terms of catchy punk, Sundials have a way of making the indie-pop sensibility sync up neatly. However, it felt repetitive on their older material. What this record does though is balance both factors off better and also, give a bit wider range. It also emphasizes that in its breezy nature, you should be rocking this shit as a summer record. The timing seems a bit odd."Dealin'" is a key example of this as it analyzes the critical issue of you outgrowing your town and the gnawing need to leave for bigger things. It's a great message that transcends the juvenile college-punk tones which felt a bit harped on in the past. "Kick" riffs off this latter point and nods to their discography but does manage to rough it up more than expected. The lyrics are a tad disturbing and immature but hey, why not? It's neat to see they didn't lose the old-school essence of Sundials. Keeping their established character works well here, and coming from a naysayer in the past, that's a big pull.

After a few spins, it's "Stun Spore" which ends up summing things up best. Warm, quirky yet elevated with big hooks and thumping bass-lines. A simple formula but one which helps build the band up as a bit older and (very) slightly wiser. It's a good step forward in shaping their formative identity but what's even better to see is how well they maintain their pop-punk liberalism that'll no doubt shunt these six tracks into something a bit bigger. And something that's more whole come the next LP. As a former skeptic, I'll be keeping an eager eye because Kick pleasantly surprised me and I kind of like these surprises. They're a good kick in the teeth.

Exodus: Blood In, Blood Out