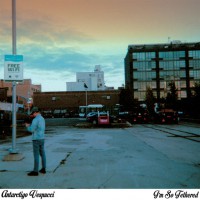 Well it looks like Chris Farren and Jeff Rosenstock have surprised us with Antarctigo Vespucciâ€™s second release of the year. The Iâ€™m So Tethered EP definitely has Antarctigo Vespucciâ€™s indie power-pop sound, but compared to Soulmate Stuff, Farren and Rosenstock have definitely upped the â€œpowerâ€ and toned down the â€œpopâ€ a bit in their bandâ€™s sound for this EP.

Of the four songs on the Iâ€™m So Tethered EP, its very apparent that Farren and Rosenstock have turned up the distortion on the first three. Interestingly though, the band seems to have tried to write each song with a unique musical detail all while maintaining an overall power-pop sound and they succeeded especially with song â€œI Drew You Once in Art Class.â€ This song definitely has the most energy of the four because of itâ€™s rockinâ€™ guitar solo-esque main guitar riff. But what makes this song so great is the last chorus where they sing it with a bit of twist; they added a few more vocal notes to it. Itâ€™s their attention to the small details that make this song (and the other three) really come alive.

Also, Jeff Rosenstock takes lead vocals only in a part of the song â€œYou Donâ€™t Scare Me Anymore,â€ just like on Soulmate Stuff where he can only be heard singing lead vocals in a section of â€œGuest List Spots.â€ Other than that section of the song, Chris Farren handles the lead vocals masterfully on the rest of this EP as he always does.

The Iâ€™m So Tethered EP ends on a softer note with the song â€œCome To Brazil.â€ Itâ€™s a tune that is very uncharacteristic of Antarctigo Vespucciâ€™s sound because the whole song is based on a drum machine with the addition some light electric piano/synthesizer, soft-sounding guitar, and backing vocals that have a bit of a â€œcall and responseâ€ feel to them. The overall calmness of this song makes it a good closer for this EP.

If you are a fan of Soulmate Stuff or either band Chris Farren and Jeff Rosenstock have been in respectively, thereâ€™s a very good chance you will like this EP. If you are new to these artists, believe me, this is a very fun release.