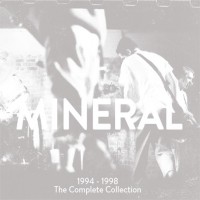 Now's a great time to be a Mineral fan. Hopefully you're catching them on their reunion shows. If you can't (like me) then what's the next best thing? A reissue with bonus tracks of course. No matter what revival or new bands come around these days, as awesome as they might be, there'll always be the ultimate and untouchable records that are The Power of Failing. and EndSerenading. What makes this collection even more pertinent, is not only does it act as a brilliant jumping on point for newbies and the unexposed, but it's a deep breath of nostalgia for fans of the '90s who were lucky enough to catch Chris Simpson's words. Combining both albums in this reissue and adding the bonus tracks really complement each other in an anthology that speaks volumes about just what emo was, is and will be. Furthermore, it helps reiterate that Mineral will always be a main pillar in the genre.

I've never been able to choose which album bests the other. The Power of Failing. offers a more pained feel, as Simpson's words usually emanate. The shrill guitars bring more of an emo-grunge atmosphere here with inevitable comparisons ringing to Sunny Day Real Estate's Diary. They're both similarly fast-paced with twinkly breathers here and there...but it's the guitar-heavy, jarring sections that stand out. These quicker tempo and louder portions hit it out the park. "Gloria" and "Slower" are a few of these smashing tunes that help build Mineral's sound in a somewhat distinct manner. The former's a driving '90s emo jam while the opening chords on the latter help temper the record to a calmer place and time. The distorted guitars and eventual banger-vibe come hard and fast just when you think you can relax and that's what helps Mineral thrive. There's never any let up even at their slower, more rhythmic sections and in these melodies, you lose yourself. The slow jams crash down into noise and the noisy tunes barrel into swoon-y states of introspection. And that's before the extra jams start spinning. The rough-cut, demo-esque tracks like "Parking Lot" and "If I Could" are bonus elements worth the price of pick up because while they're not too far off from the originals, the dirty reverb helps immerse you as if you were right alongside the band in the studio. It feels raw, energetic and connective.

The EndSerenading ensemble of tracks on the other hand are more haunting but less urgent and anxious. This record has more crooning and slow strumming which gives an impression of Simpson being more open and mature. The start-stop power of "Palisades" shows the focus on lull-to-noisy ambiances which they toy with more than usual. I wouldn't say it's less loud but it balances the band's musical spectrum better. "ALetter" reminds you of this as it's twinkly and upbeat yet you still can't get over the depressive and heartbreak factor of the music. Just to give a sample of the bonus elements here, look no further than "February" which burns at your soul and that's before the screeching halt comes a-crashing down with a guitar breakdown to leave you speechless. There's a great pensive tone as Simpson lures you in with the calm before the storm. That's the band in a nutshell for you. Inventive yet nothing too revolutionary as they churn out poetry layered over amazing instrumentals.

Mineral's always given a fresh and different perspective on music and life, even if bands existed that sounded the same or tried to copycat in the ensuing years. If Simpson's Zookeeper solo project is a sign of things to come, then rest easy. His lyrical content seems much more at peace now and that's enough in itself to see what course they chart. Using this reissue as a whole spread, all the tracks here feel like an interface for those coming of age and those who are lost and looking for kindred spirits. Pick it up and let the music sink in. Trust me, there's nothing like Mineral out there on the market. If they start pumping out new music (**fingers crossed**), it'll be interesting to hear, given that Simpson seems less bleak and angsty. I've already set money aside.