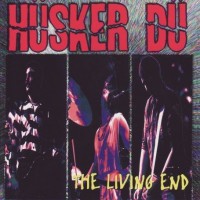 The world probably wasn't crying out for a HÃ¼sker DÃ¼ live record in 1994. But seven years after the band had acrimoniously parted ways, it got one. Maybe someone at Warner Bros. suddenly remembered that they'd signed the band to a three record deal and only got two out of them. Maybe it was an attempt to capitalise on the fact that a new breed of alternative rock stars were starting to cite them as an influence. It probably wasn't the band's idea, given that Bob Mould claims that he's never even heard the record. Either way, the result was The Living End.

Recorded on a fractious North American tour in October 1987 not long before the band imploded, it's an interesting but strangely unsatisfying listen. That's mostly due to a frustrating song selection. Every era of the band is represented, and fans of their scrappy beginnings will relish the incendiary runs through "Data Control" from Land Speed Record and the early single "In A Free Land". But the track listing wilfully ignores most of the band's singles and signature tunes, like "Makes No Sense At All", "Sorry Somehow" and the gloriously catchy "Donâ€™t Want To Know If You Are Lonely".

There are only two songs from Flip Your Wig, which Mould considers their best album, and, inexplicably, only one from Zen Arcade, which pretty much everyone else sees as their finest hour. Only finding space on a 24 track live album for one from that seminal record is almost unforgivable, and it doesn't help that the one track chosen is the relatively inessential "Whatâ€™s Going On". Candy Apple Grey is also underrepresented, with only the six-minute miserablism of Mould's "Hardly Getting Over It" flying the flag for their major label debut.

The album kicks off with the opening two tracks from 1985's New Day Rising, the pummelling repetition of Mould's title track followed by Grant Hart's sweetly melodic "Girl Who Lives On Heaven Hill". Next come three in a row from the band's swansong Warehouse: Songs And Stories, in exactly the same order and track positions as on that album, before the record's first curveball arrives as bass player Greg Norton growls the snappy Warehouse-era b-side "Everytime" through his handlebar moustache. They're all fine songs and competently played, but setting them out like this makes you wonder why you're not just listening to the studio album instead. The liner notes describe the band's love of combining similarly themed or paced songs into "packs of three", which may be a neat way to construct a setlist but perhaps lacks a little spontaneity. Later there are a trio of short fast songs from the bandâ€™s early days, the machine gun drumming of "From The Gut", the raging "Target" and the sweetly acerbic "It's Not Funny Anymore". These three really do work well as a set, tied together by themes of seeking individuality and escaping the rigidity of their hardcore punk roots. "You listen to the same fucking records every single dayâ€¦ you donâ€™t like the people who caught on late, if theyâ€™re having fun", Mould snarls in "Target". "Play what you wanna play, hear what you wanna hear", Hart proclaims in "It's Not Funny Anymore".

Then there are three more in a row from New Day Rising and two in a row from Flip Your Wig, before an ill-advised foray into what were at the time new songs. For HÃ¼sker DÃ¼ fanatics, these might be the most interesting tracks on the record; for casual listeners they're undoubtedly the album's weak point. Hart's poppy by-the-numbers "Now That You Know Me" also surfaced on his 1989 debut solo full length Intolerance; Mould's subpar stomper "Ain't No Water In The Well", perhaps tellingly, never showed up on a solo album. A cover of "Sheena Is A Punk Rocker" wraps things up. The band sound like they're having fun with it (is it possible not to have fun playing a Ramones tune?), but it's a strange way to end a strange album. For a band that never did things conventionally, closing with something as conventional as a Ramones cover, and an obvious choice at that, doesn't quite fit. I don't know, maybe in 1987 not every man and his dog were doing Ramones covers.

Utlimately, The Living End doesn't quite work. For newcomers, the lack of "hits" in the setlist mean it's not an ideal introduction to the band. For old fans, it's a perfectly serviceable live record but few if any songs improve on their studio counterparts. While it goes some way towards capturing the always-on-the-brink-of-collapse controlled chaos of a HÃ¼sker DÃ¼ show, it's interesting but far from essential.

Major League: There's Nothing Wrong With Me