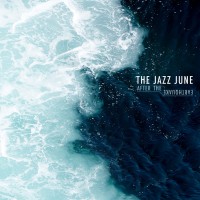 The Jazz June's pretty much shaken the tags of the past. That about sums up After the Earthquake. It's the record that separates them from the younger, more pensive days. Familiar pulls to records like The Medicine do pop up here and there but as their more upbeat, level-headed nature emerges, you feel a sense of maturity and one of peace arising. Easy on the ears and very much a '90s alternative rock record.

"Over Underground" is a prime example of TJJ at their pop-punk best. Shimmering guitars and a catchy, melodic aura. It really sets the stage for a lighthearted listen. In this sense, TJJ ends up pretty unwavering. The guitar-driven record anchors itself in a way that can best be described as "less emo" and one which disconnects from American Football, Braid and Mineral. Deeply. Even the bass-laden title-track feels more airy and built on giving the listener room to breathe. The songwriting does end up being a bit conventional and not as inspiring as old but while these lyrics aren't as deep, the crunchy rhythms and telling melodies at hand more than make up. I saw the same with Mineral's Chris Simpson in terms of musical prose. Guys who are past their 30s and just over making depressive music. They've outgrown those days so really. What sense does it make to harp on coming-of-age stories?

While TJJ feel like they switched gears to a more mainstream, overly polished production, the subtle nuances and rough textures of the past creep up to powerfully stick you with nostalgia -- reminding you how they probably came before their time. "Stuck on Repeat" as a Jimmy Eat World copycat feels like it would have slain radio play around the 2000s and the same could more or less be said for "Ain't It Strange." This ends up as the most jarring and dark tune at hand in its distorted riffs and a Brit-indie-rock jam that would have Interpol fans finger-tapping and foot-banging.

While some of After the Earthquake feels a tad elementary and pedestrian, it still offers a great listen. The 12-year absence results in a band that's older and wiser and it's in this evolution TJJ could well lose the identity that we all are accustomed to. Or perhaps, it's about forging a new brand, a new sound and a new face. These later points are what The Jazz June feel like at present. How will this stand up and survive? That remains to be seen, but their return, while not as triumphant as I anticipated, ends up being one that ain't too bad at all.

The Damned/T.S.O.L.: Live in Philadelphia