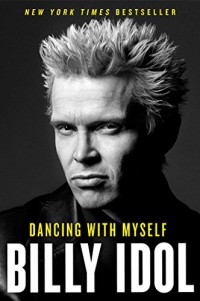 In his new autobiography, Dancing With Myself, OG punk rocker and â€™80s pop star Billy Idol comes off like the coolest guy, an artist equally comfortable discussing the French New Wave and the Sex Pistolsâ€¦sometimes. Other times, he comes off like a not-quite-reformed addict who brags about his illicit exploits as much as he atones for them. Itâ€™s this dichotomy that makes the book an uneven, but still overall compelling read, as Idol examines his rise and fall on the music charts.

But man is the rise way more fun. Ever the good Irish kid, he praises his parents for instilling his work ethic and love of music. After moving from the U.K. to the U.S. and back again, the boy born William Michael Albert Broad recounts his childhood with a series of vignettes (how the U.S. ruined his accent as a boy, how he lost his virginity, etc). Some of the bookâ€™s strongest passages have nothing to do with Idolâ€™s career, but rather the records he grew up on and the friends he met while following the Sex Pistols on the road. The guy could probably write a darn fine Siouxsie Sioux biography.

Itâ€™s easy to forget given his status as one of the first MTV icons, but Idol was present for the birth of U.K. punk, and the chapters regarding his punk band, Generation X, benefit from hindsight. Of course he was always going to be a star; Idol was always too interested in song composition to settle for three-chord punk.

Itâ€™s after Gen-Xâ€™s dissolution and Idolâ€™s rise in the states as a solo act that the book starts to stall. Not that the stories behind creating â€œRebel Yell,â€ â€œEyes Without a Faceâ€ and â€œWhite Weddingâ€ arenâ€™t interesting; itâ€™s just that Idolâ€™s life story got a lot more repetitive once he could afford drugs all the time. While he has an eye for visceral detail (a tale about doing lines of coke and having sex with a stranger in an airplane bathroom borders on the pornographic), itâ€™s also hard to sympathize with a guy so hellbent on destroying himself and every hotel room he stays in after a while.

At the same time, though, Idolâ€™s journey back from the brink (and the 1990 motorcycle accident that nearly took his leg and serves as the autobiographyâ€™s framing device) should bring the reader back. He never claims to have gotten sober, but the lengthy description of the surgeries required to save his leg should sway at least a few from driving under the influence. Oh yeah, and he talks about his part in The Wedding Singer. He was good in that.

Dancing With Myself has its lulls, as Idol is sometimes a few synonyms short of selling his hedonistic free love lifestyle. But it also thrillingly details â€˜77 punkâ€™s birth and death, a handful of anecdotes about fellow â€˜80s pop icons like Madonna and Prince [FACT: Prince and Idol once vied for the same woman. How is that not a movie?] and even works in some solid praise about pizza, because heck yeah pizza.