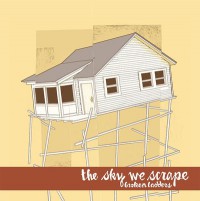 The Sky We Scrape

The Sky We Scrape was one of those unexpected gems that crawled out the woodwork in 2013. Divides was definitely a blinder of a record that showed how well they could carve their way through post-hardcore with a pretty strong punk influence. This confidence definitely trickles over into Broken Ladders. It sits well with a sound heavily influenced by the '90s and early 2000s. But with just four tracks, you're left a bit wanting. In a good way that is. It's too short but still pretty sweet.

Broken Ladders is more dirtied and filled with quicker rhythms. The guitars are so grimy and with some shredding solos to boot, Jason Thompson's vocals get a neat base to work on. Ryan Steele's guitars sync up so well with his delivery and when tracks like "Ghost Bikes" and "Bounder" hit, you're moved. Tight kit work and very in-your-face. Such a crunching batch of tunes yet not too overdone. The dual vocals blend so well also and really throw you back to how awesome Divides was. It's a huge relief to see a 'small' band continuing with such a high quality on a consistent basis. I can see people really getting into them at The Fest 13 because of how much emotional pull they pour in on the mic. There's something big here that you can't help but gravitate to.

They even kick around their melodic nature on "Mended Fences" which is one of the best tracks I heard this year. 'This is how a house becomes a home' is the mainstay of this anthem of family. Less aggressive and so comforting. It even ends with a Saosin-like finish that's personally a big bonus to me. They could have toyed with this sound a bit more because it's one of their biggest strong points which I don't think they focus on as much as they should. Overall though, their dynamic and versatility will surely be selling them down the river in a manner that'll be filling out shows soon. Another smart step in the right direction and and another solid effort from a band that's definitely gonna be kicking down more doors the more they put out.

Billy Idol: Dancing With Myself [book]