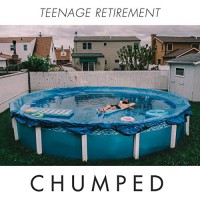 Chumped was a band I tagged as a near-perfect blend of indie meets pop-punk, especially after their 12-inch. As time elapsed, I wondered if they could maintain this momentum. However, things changed a bit. It's hard for me to stick to this aforementioned tag now and this in itself is something that really doesn't bug me. Why? Well, because they've gone rougher, faster and entrenched themselves in making music with more attitude and a whole lot more spunk. Teenage Retirement breaks walls down and in doing so, it paints itself as a stroke of genius that'll no doubt end up paying big dividends.

Anika Pyle's nasal vocals really set the album on fire, as expected. It's her delivery that adds a cute flair to tracks like "Hot 97 Summer Jam." This hinges on pining and pining...and being pissed due to longing for a certain someone -- which shows how simple Chumped like to keep it. It feels like Pyle's back in her teenage diary again. As she adds a bit more spice on in-your-face bangers like "Coffee," it's apparent how well they tailor their sound. It's a much more brash punk approach than I initially bargained for. They clearly ditch the elements that hint at a catchy summer record and let loose with crashing punk riffs and attention-demanding bass lines. Melodic yet relentless. And as cliched as it may sound, pure fun.

There's barely any filler tracks offered on Teenage Retirement. It's all about high-energy tunes that never let up. "Novella Ella Ella Eh" is another example of the record's drive. I'd say ambitious but deep down, I knew I'd be blown away. Even when they shake things up on "Long Division," you're left scratching your head. From quick musical structures to mid-tempo lulls, they vary their sound a lot and show their range. You feel that emo connection as Pyle and co. help layer more substance over their flashiness and style. Again, it's a great mix and one that really sees them living up to the potential they've always shown. If I had to pinpoint these batch of tunes, I'd say collectively, they feel like Slingshot Dakota meets RVIVR.

By the time the twinkly emo closer "Old and Tired" rears its head, you're left stunned and gasping for breath. It's a non-stop kick-ass set to add to the Chumped archives but it's one that doesn't feel too rushed or too frenetic. As this song ends proceedings, with a bit of '80s flair to it, one thing stands out -- and that's how unafraid Chumped are. Bold. Youthful. And well on their way to making that giant leap we all knew they would. Teenage Retirement is the bravest and biggest statement the band has made to date.