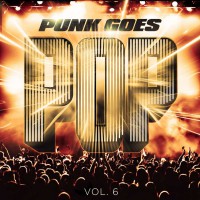 It's that time of the year again. Christmas, right? In topping that off, it's my annual take on something that I hold dear to heart. Sad to say, it's the same old when it comes to Punk Goes Pop Vol. 6. Fearless Records continue to throw a majority of bands on the album that aren't punk, to cover songs that don't even end up anywhere close to being, well...punk. I said it before and I'll say it again...this record deserves to be called [whatever-core] goes mainstream. In fact, it pretty much spits on the mainstream it actually tries to cover and continues to leave me in awe how far this has fallen from the first couple of issues.

The level of crap on tap is summed up with Upon A Burning Body & Ice T on their "Turn Down For What" take (originally performed by DJ Snake & Lil John). Gut-churning screamo (if that's what this attempts to pass off as) with Ice T doing his best to shit on his Law & Order character really leaves you on the verge of vomiting. No joke, it's abysmal. Then comes August Burns Red doing Miley's "Wrecking Ball".I love this jam. It's a classic. The cover has potential. Yet, this band finds a way to royally fuck it up with another deathcore take on...I can't even finish this. Most of the jams offered come off like this: wasteful and undesirable with heavy riffs, no melody and heavy double-kicking that all combine into an incoherent mess.

Now, you do have little nuggets to enjoy here and there. Youth in Revolt does a great cover of Lorde. "Royals" comes off more as a YouTube cover than anything else though. Most of these tunes lack passion or emotion. Still, this tries its best. Bands like Knuckle Puck and State Champs give it the ol' college try. But, I am being generous. Slaves' "Sweater Weather" (originally performed by The Neighborhood) is another rare bright spot and it kinda barrels this album into one really defining (and atrocious) statement. When you have Jonny Craig this day and age saving your record, you know you're fucked.

At The Gates: At War with Reality